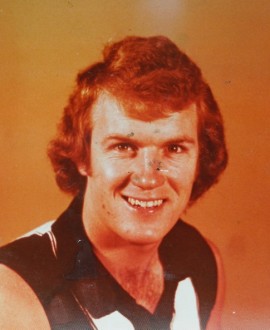 Dashing Collingwood defender Paul Cranage played only 48 games across three seasons in black and white, but still managed to make an impact when it counted.

At a time when a number of Magpies players struggled to produce their best during the heat of September action, the half-back from Hamilton reserved some of his best performances for finals. He was among Collingwood’s best players in three of the four finals he played (in 1973 and 1974), with only one of them resulting in a team victory.

His connections with Victoria’s western districts, where he was “country born and bred”, ensured his time at Victoria Park was short-lived, though his links to the club have always remained strong. Over the years, he always kept an eye out for players he thought Collingwood should recruit (two prominent names included), and even returned to the club as a reserves coach for a short time.

Cranage had grown up on his parents’ “mixed farm” – sheep, cattle and pigs – in Edenhope in the Wimmera, 400km west of Melbourne. He had been a Geelong supporter as a kid, obsessed with “the Big Cat”, as he liked to call champion ruckman Graham ‘Polly’ Farmer. As a student of Monivae College, in Hamilton, Cranage attracted the interest of Magpie talent scouts, with the region being in the heart of the club’s recruiting zone. For the last three years of his schooling, he was in the First XVIII, and was captain in his final season (1971).

It was a fertile time in terms of the school’s success. In each of those three seasons with Monivae College, the school won the premiership. One of his teammates in that Monivae team was Mike Delahunty, while future teammate Bill Picken was also a student at the school.

Cranage got his opportunity after impressing in a country versus city match played in the Collingwood area, after which both he and Delahunty were invited to Victoria Park. He moved to Melbourne in 1972, but struggled to make any sort of impact in his first season. He briefly considered returning home, but felt the embarrassment would be too great. “I felt like throwing it in, but well, what would you say when you went home?” he said later.

The opportunity Cranage had been craving eventually came in 1973, when he was selected as one of the reserves players in five games early in the season.  Eventually he managed to get an on-field start – and he made the most of it. In Round 10, against Hawthorn at Glenferrie Oval, he was named at half-back, had 17 disposals and was named in the club’s best players.

Cranage not only broke into a team that would ultimately finish the home-and-away season on top, but he made a real difference to it. Incredibly, his first 14 games came in winning sides. He wouldn’t play in a losing side until the Round 20 loss to Richmond, as the Magpies headed towards a finals berth. He ended up playing 19 games in his debut season, winning the club’s best first year player award, and capped off with a strong finals series.

Cranage was able to balance reliability in the back half with a dashing style, often turning defence into attack. He was well built and medium height, usually finding himself on a half-back flank. His key weapon was speed, and his willingness to back his judgement and use it. Described as “a determined and dedicated player who can check and keep an opponent out of play”, Cranage was a solid mark and used “(his) pace matched with skill to win kicks. (He’s) not a star, yet one who can be relied upon to do a very workmanlike job no matter how difficult the task.”

In 1973 the Football Record described Cranage as “(a) spectacular defender … (he is a) dashing type who backs his judgement and has become an important and lively part of the Magpies’ defence.” He backed up those words with a fine display in his first final, having an equal career-high 27 disposals that led critics to nominate him as the best Magpie in a losing team and one of the best afield. The Sun wrote: “It is hard to find one Magpie – apart from Paul Cranage last Saturday – who grows in stature when the chips are down.”

It was a similar story the next week in the preliminary final, when the Pies famously blew a big half-time lead to be overrun by Richmond. Again, Cranage was one of Collingwood’s best in a losing team (with 17 disposals) as the minor premiers embarrassingly crashed out of the finals in straight sets.

He built on that excellent first season with a solid second, playing a further 19 games and entrenching himself in Collingwood’s back half. He excelled in the finals again, being one of Collingwood’s best players in the elimination final win over Hawthorn. He would play 10 games in the first 12 rounds of 1975 – under new coach Murray Weideman – but then cut his career short to move back home and take up a physical education and biology teaching role at Monivae College.

It was at his old school that he took on coaching the First XVIII, setting him on a pathway that would lead him back to Victoria Park. In time he would become a superb judge of a young footballer. At the school, a few years later, Cranage came across a kid that he saw some potential in. The kid’s name was Phillip Walsh. And it was Cranage who alerted the Pies to Walsh’s potential, encouraging them to recruit him for the 1983 season. Walsh ended up playing every game that season and ended it as Collingwood’s best first year player – the same honour Cranage had won exactly 10 years earlier.

Cranage became one of the most successful regional coaches during the late 1970s and ’80s, before he returned to Collingwood as reserves coach in 1985. He ended up spending three seasons at the club, under Bob Rose and then Leigh Matthews, accepting a pay cut, as the players did, during the Magpies’ financial disaster in 1986.

Returning back home to Hamilton, he became club president and put his time into his business (Cranage Financial Group) that still flourishes. He was also able to lure Bill Picken back to the western districts as coach and in time would recommend Picken’s son, Liam, to Williamstown, as a likely type, when the VFL club had a link to Collingwood. The Bulldogs would ultimately be the beneficiary of that.

Cranage’s own son, Sam, played AFL football, though not as a father-son recruit, given Paul’s brief career at Collingwood. Sam was drafted to St Kilda, and played eight games between 1998 and 2000, before moving to Carlton (as part of a trade for Aaron Hamill), where he managed 10 games in 2002.

But Sam would come to have a Collingwood connection of sorts, which delighted his dad. He played for Williamstown in the VFL for a number of years, including in the 2003 premiership side which included future Magpie greats Dane Swan, Nick Maxwell and a host of other Collingwood footballers.

Fittingly, Sam was named at half-back for that VFL Grand Final – the same position in which his father had played at Collingwood, albeit not for as long as he could have.