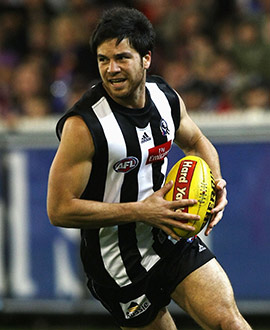 Mercurial, explosive and with a highlights reel comparable to the game’s best small forwards, Medhurst won Collingwood’s heart with a 50-goal season that culminated in All-Australian selection in 2008.

The gap between his best and worst fluctuated on occasions, but he provided wonderful value in 69 games after crossing from Fremantle at the end of 2006.

Recruited from Claremont, Medhurst’s career as a Fremantle Docker got underway with a three-goal haul against West Coast in the first round of 2002.

Aged 20, he kicked 36 goals for the season including four against Collingwood in round 12.

By the time he had followed it up with 50 in Fremantle’s run to September the following year, Medhurst appeared on the verge of superstardom in the west.

But form issues took their toll, despite a bag of nine against Brisbane mid-way through 2004, and when he could average only a goal per game across 12 outings in 2006, he found himself on the move to Victoria.

Medhurst was known as the ‘steak knives’ in the trade that saw Chris Tarrant become a Docker and Collingwood land the eighth selection in the 2006 National Draft (Ben Reid). But by the time he hit his straps, Pies fans knew they had got more than they had bargained for.

Medhurst began 2007 slowly, having his tonsils removed during the pre-season, breaking a bone in his foot during a practice match and straining ankle ligaments early in the year.

Despite all this, he played in the first three rounds of the season, kicking four against Richmond under lights.

His season only really gained momentum late in the piece when he recorded two three goals in the space of seven days against Richmond and Melbourne on the eve of the finals.

Medhurst showed his true colours in September, kicking two important goals in the win over the Eagles in extra-time before taking a leading role in the epic Preliminary Final cliffhanger against Geelong, kicking three goals including the one that brought the Pies to within a kick with a minute to play.

He enjoyed a career-best season in 2008, kicking 50 goals, landing a place in the All-Australian team and receiving the R.T. Rush Trophy as runner-up in Collingwood’s best and fairest.

After a slow start to the year, Medhurst clicked into gear during a horror loss to North Melbourne in round five, kicking five majors before backing it up with six against Essendon on ANZAC Day to win the ANZAC Day Medal as best afield in a 73-point win.

Two more bags of five followed, against West Coast and Adelaide (when he kicked 5.5 in round 15), and he ended the season with at least one goal in all bar three of his 24 games.

Although his form tapered off slightly at the tail end of the season, Medhurst was an important contributor in the surprise win over the Crows in the Elimination Final.

He started 2009 in solid touch, peaking with four goals and 13 disposals against the Lions in round four, a night memorable due to the fact that he kicked his last goal concussed and did not know at the time which way his team was kicking.

Injuries began to take their toll as the year wore on and meant he could not get the continuity in his football that made him so dangerous twelve months prior.

Medhurst kicked just five goals in his last nine games and only one in September, but started 2010 on the right foot with four goals against the Western Bulldogs in round one.
Unfortunately, injuries again took their toll and his best form deserted him as a result. He had one final spike, kicking three goals in consecutive weeks against the Blue and the Kangaroos in rounds six and seven but would play just three more games for the year as foot injuries robbed him of his momentum.

He was brought back for one time against Essendon in round 20 but appeared rusty.

After the game, coach Mick Malthouse admitted he had kept Medhurst in the VFL for too long.

“I thought he (Medhurst) played like a VFL player coming up to play AFL football,” Malthouse said after the 98-point win.

“I’ve said it all year – he typifies the level of skill which is not necessarily greater than VFL, but the level of intensity is massive.

“And if you’re out of it too long, and that’s my fault, he has probably been out of it for too long. He’ll need time to reacquaint himself with that sort of intensity.

“Paul understands that, the longer you’re down there, it gets harder.”

Sadly, that Friday night against Essendon was the last the AFL saw of Medhurst.

He played out the remainder of the season in the VFL, and according to coach Gavin Brown was his side’s best player in the Elimination Final loss to the Northern Bullants at North Port Oval.

“He had an interrupted start to the game as he was held as a carry-over player (for the seniors’ match against Hawthorn). He drove from the MCG to North Port and arrived at the ground 10 minutes into the first term.”

Medhurst announced his retirement three days after the team’s win over St Kilda in the Grand Final Replay, and soon returned to the WAFL where he continued to dazzle the local supporters.

“He has outstanding abilities and possesses a wonderful mark and a beautiful kick for goal,” Malthouse wrote in an online tribute to Medhurst.

“It would be fair to say through his career he had highs and lows, not about his abilities, but about his mindset and focus.

“At 28, he has several years left in footy but he has also got a calling outside of football where he wants to spend his life doing other things.

“He got on very well with people. I am delighted we were able to get him over here and play for Collingwood.

“I am not surprised and very happy for him that he made a decision and left something in the tank and people will remember how good he is.”