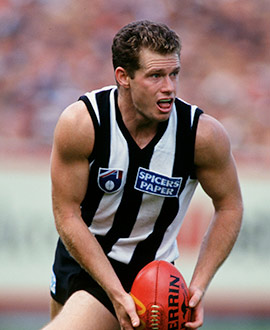 One of the fastest players of his era, Williams had the exceptional knack of being able to kick long goals when running at breakneck pace.

His breakaway speed made him a match-winner – his trademark was a dash out of the centre and a long bomb goal from 50 metres.

Great stamina also made him a quality centreman.

Serious ankle injuries hampered his preparation for 1995 and 1996 but he was still a fine player and at Collingwood he was regarded as the consummate professional.

He had a shock introduction to League football in his first game when he was wrestled to the ground by John Worsfold in retaliation for Craig Kelly’s attempts to rough up Peter Sumich further afield.

At the end of 1994 ,Collingwood paid big dollars to keep him out of the clutches of Fremantle and while some doubted the investment at first in the long run they were won over by his exciting style.

Recruited from North Hobart, he seemed unsettled at Collingwood in 2000 and was traded to Sydney at the end of that season.

Williams had another fine season in 2003 and was once more productive in 2004.

Although he fractured a collarbone in 2005 he capped off the year on the highest note as part of a premiership team. In 2006 he re-injured the collarbone late in the season and decided to retire.

A career as a coach followed, peaking when he was anointed interim coach at the Western Bulldogs after Rodney Eade’s departure at the tail end of 2011.