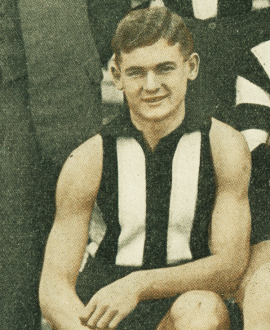 There is a slightly romanticised notion that all Magpie players in the 1920s were locals who had grown up in or around Collingwood, dreaming of nothing more than pulling on a black and white jumper. And while that might have been true of many of them, it could definitely not be said of Percy Bowyer.

Bowyer was born in England in 1909 and his family came to Australia when he was just a couple of years old. They settled first in Tasmania, and moved to Melbourne in 1918 to manage the Club Hotel in St Kilda. It was the first in a string of hotels that the Bowyers would manage, and young Percy would change his football allegiances each time the family moved, so that they matched those of the latest hotel’s clientele.

So as his dad looked after hotels in St Kilda, Port Melbourne, the city and Fitzroy, so did Percy’s support shift from the Saints to the Swans to the Blues and the Roys. It was not until his father took over the Sir Robert Peel Hotel in Collingwood that Percy found his true faith.

Percy went to the Cambridge Street School (where he often played against the Victoria Park School, which featured Harry and Albert Collier), but left there at 13 to work at Carlton and United Breweries (where he remained for the rest of his life, eventually rising to a senior position). In 1926, aged just 17, he put in a good performance for the brewery team against the warders from the Kew Asylum, and his captain tipped off a fellow CUB worker by the name of Jock McHale that here was a kid worth watching. Bowyer was invited to train with the Collingwood seconds soon after, but kept playing with a local under-17 team called St Saviours, where selection each week was conditional on the player having been to church the previous Sunday.

Percy was finally called up to play a match with Collingwood seconds late in 1926, and spent the 1927 season there as well, winning a trophy for the most improved player. But the most telling performance was the one he put in during the losing semi-final to Carlton that year, which impressed Collingwood selectors so much that they invited the youngster to train with the seniors over the summer. Remarkably, he was able to break into the reigning Premiers’ line-up straight away, securing a spot for the opening game of 1928.

For the next 11 seasons he was a regular, reliable, consistent member of the side. He was not a star by any means, but he was talented, dependable and versatile enough to be a valuable member of four Premiership teams.

The key to Bowyer’s success was his versatility. At 178cm and 79.5kg he was tall and strong enough to compete in the air with many opponents, yet fast and agile enough to match it with smaller, nippier types. He was not a master exponent of any facet of the game, but was solid at all of them. His kicking was good, his marking reasonable and his spoiling better. But there was not much variation between his best and worst games, meaning coaches and teammates alike could rely on a certain level of output from him no matter where he played or what assignment he was given. He started out in the back pocket, moved to a half-back flank and held down the wing in a Premiership side. But it was in the mid-1930s, when he moved to a position that would later be defined as ruck-rover, that he really found his niche. And it was that role he filled in the back-to-back flags of 1935–36.

Bowyer’s importance to Collingwood wasn’t simply confined to on-field matters, either. He formed a lasting friendship with Bruce Andrew soon after their arrival at Collingwood, becoming so close they were often referred to as “the twins”. Bowyer was a particularly keen dancer, which led him to an active involvement with Andrew in organising many of the team’s social activities. He was regarded by all his teammates as a real gentleman, in the old-fashioned sense of the phrase, and even late in his life was often seen at Victoria Park, immaculately dressed and with perfect manners, impressing all with a kind of “old English” style. Think of David Niven without the moustache.

Not everyone can be a star – especially in teams like those Collingwood put out in the late 1920s – but players like Percy Bowyer are important in any side. They’re reliable, consistent and help the bigger names to shine. That’s what Bowyer did in more than 150 games in the black and white – and he did it better than just about anyone else.