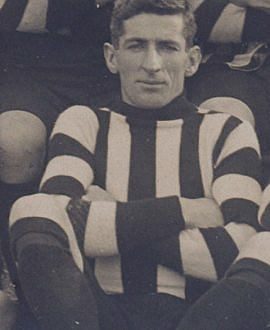 In the early 1900s, Percy Gibb was hot property. He’d played in a VFA Premiership with Richmond in 1903 as a 21-year-old, and the fleet-footed wingman was in demand. Collingwood secretary Ern Copeland saw the potential and arranged a meeting with Gibb, after which he ‘all but’ agreed to join the Magpies. But nothing was signed. A short time later Gibb was approached by Fitzroy secretary Con Hickey. When Gibb told him he had verbally agreed to join Collingwood, Hickey made no attempt at counter-offers or persuasion. He politely ended the conversation and told Gibb, “Then you should play with them.”

That sort of honourable response is unlikely to happen today. But Collingwood was forever glad it happened then, because it gave the Pies a high-class 10-year player who, even more importantly, would remain deeply involved with the club right up to his death 35 years later.

Percy Gibb started at Collingwood in 1905, and he showed immediately that the jump from VFA to VFL was not going to be a problem. He looked at home from the very start, playing every game and regularly featuring among the Pies’ best players.

He would spend almost his entire career on the wing, where his natural, explosive speed was at its most destructive. Twenty years after he retired, Gibb would still be recalled as one of the era’s great ‘speed merchants’. But there was more to his game than dazzling pace. He was a sublime left-foot kick who consistently hit his targets whether short or long. He was a handy mark for his size too, and a sure ball-handler in wet or dry conditions. Newspapers regularly referred to him as an ‘artist’, such was his mastery of the ball and his pinpoint delivery. There was also a coolness about his play that impressed all.

Still, it was hard to escape the impact of that speed. “Gibb tears around the wing with the happiness of a boarding school lassie out for an airing,” wrote Punch in 1907. “When he secures the bag of hot air he makes straight for the gaudily-coloured uprights and never stops to pluck daisies.”

Gibb formed part of a number of famous Magpie centrelines, almost all of them with Jock McHale in the middle, and himself, Jim Sadler then Jim Jackson on the wings. Dan Minogue would later remark that Collingwood centrelines were rarely beaten in those days.

That was particularly true when Gibb was at his best. He was an important member of the 1910 Premiership team, but lifted his game another notch in 1912 when some observers included him among their best players of the year across all clubs. “The frequency with which the ball was passed by Collingwood’s men out of the crushes to Percy Gibb on the wing, and the certainty with which that player always made the very best use of the opportunity, has been one of Collingwood’s factors of success,” wrote the Argus. More than 100 years later, Collingwood would nominate him retrospectively as the club’s Best Player for that year.

Gibb was a popular team member and he quickly grew to love the club. He was also a fine cricketer and became involved with the Collingwood Cricket Club. And it was his love of cricket that ended up defusing a strange but awkward incident early in 1914.

Percy was an accountant with leather goods firm John Kennon and Sons. In March 1914, the company was holding its annual picnic. This was a big event, with hundreds of people attending. At the official luncheon that day, the Mayor of Richmond, Mr G Webber, refused to stand for the toast in honour of “His Majesty the King”. Percy was angered by the lack of respect, telling Mr Webber his actions were an insult to the organisers and that he should not have attended if he felt so strongly about the toast. Workers gathered around the pair and the argument became “extremely heated”. In the end, the only thing that saved the situation from worsening was Percy being required at the crease to bat in the firm’s annual cricket match going on outside!

That incident showed there was still plenty of life in the old dog coming into the 1914 season. He was 32 by that stage, although he looked older because of his prematurely greying locks. His brother Reg had joined him in 1913, as had another brother, Len, the year before (newspapers often referred to them as ‘the brothers Gibb’, which fans of the Bee Gees might recognise). Unfortunately Percy injured his knee early in 1914, and although he came back twice, the injury restricted him to just 10 games.

At the end of the year the club reported that Percy had completely recovered. But he retired anyway, hanging up the boots just shy of his 33rd birthday and embarking on the next phase of his Collingwood service, which saw him make long-lasting contributions to both the football and cricket clubs. He formally joined the football club committee in 1922 and served 19 years there, still being in the role when he passed away after a sudden illness in 1940.

Percy Gibb was a wonderful servant of the Collingwood Football Club. A brilliant wingman in his day and a loyal and ardent worker off the field, he gave a huge amount to the club he came to call home.