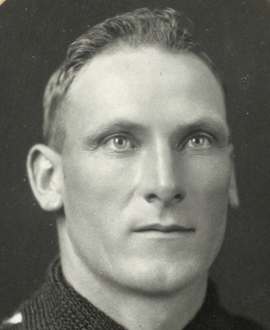 Victoria Park in the 1920s was a place not exactly devoid of tough footballers. The Colliers, Syd Coventry, George Clayden, Len Murphy and Ernie Wilson were all opponents to be feared. They played the game hard, and had a “take no prisoners” approach that would make many of today’s observers shudder. This was an era where only the strong survived; Collingwood, thanks to its legion of “hard” men, flourished.

Numero uno among those hard men was Percy Rowe. Today his name is familiar only to a few long-standing supporters and to students of football history. But his former teammates never forgot. His 96-game career took him ever-so-briefly to the top of the Collingwood tree, and eventually culminated in one of the most remarkable solo efforts in the history of VFL finals football.

Percival Henry Rowe was born late last century into a family of eleven in Rutherglen. In those days Rutherglen was a gold mining town. After leaving school Percy was trained as a blacksmith to help make equipment for the miners. By that stage he was already making his mark on country sporting fields.

He excelled at three sports, boxing, cricket and football. Of the three, it was cricket and boxing in which he initially achieved most recognition. He won numerous heavyweight bouts in country areas, and was later offered main bouts at some of Melbourne’s biggest boxing stadiums. One promoter was later heard to comment that Rowe’s failure to pursue a boxing career was a “tragedy” for the sport. At cricket, too, he came under early notice for his left-arm pace bowling. Indeed it was cricket that first drew him to Melbourne, when Australian test player and local Collingwood hero Jack Ryder invited him to try out with the Magpies at the summer game.

Fortunately for football, Rowe had neither forgotten nor forsaken his winter pursuits. He had won considerable acclaim for his fine performances in country football, first with Christmastown (near Rutherglen), then later with Lake Rovers. He found himself enjoying his football even more once he came to the city, and his interest in the summer sport began to wane.

In 1920, at the relatively old recruiting age of 24, Rowe made it to the senior list at Collingwood. Only three years later, he was elected captain.

The reasons for his rapid ascension to the throne of captaincy lay in the outstanding, fearless and selfless contributions he made from the first time he pulled on a Collingwood jumper. He was a big, strong man standing just over 183cm (6ft) and weighing around 87kg (13st 101b), with massive forearms and shoulders.

By the 1923 pre-season, The Sporting Globe was moved to comment on Rowe’s “remarkable” development as a footballer. “He is a fine specimen of Australian physique and is now one of the top-notchers of the following divisions,” the paper reported. “Percy is great on the hit-out, and is an ardent believer in coming in from the back and taking a spring. Woe to any shepherder who tries to stem this six-footer by running back to stop him, for he will have the benefit of nearly 14 stone on top of him. Candidly, I do not think there are many more accomplished followers in this State than Rowe.”

On top of this, “Oily” Rowe was handy around the ground, becoming known for his strong marking and “neat” handball. But it was mainly the amount of hard bullocking work he put in which set Rowe apart and earned him the respect of his fellow players. His play in the ruck was always strong and he was a willing worker who took more than his share of knocks. At times he acted as virtually a one-man buffer zone to other Collingwood players. He was also renowned as a protector of young players, and he would not hesitate to “run through” anyone he felt had dealt unfairly with a comrade. Sometimes he and his good mate Ernie Wilson, a tiny but aggressive defender, would hold dressing room discussions about which one of them should do the “evening up” with an opposition player who had transgressed.

Len Murphy, himself renowned as a big, rugged competitor, once said that Rowe was the toughest of all Collingwood players. Harry Collier concurred. “Rowe was one of the toughest blokes I saw — and he looked it, too” says Harry. “I would hate to have been an opponent if he did not like you.”

Incredibly, Rowe was a “pussycat” off the field. As with George Clayden he was a real Jekyll and Hyde character, away from football being gentle, amiable and quiet — almost deathly quiet at times. A carpenter by trade, he did not drink, smoke, gamble or swear and was almost painfully shy in social situations.

He was a great clubman, who always thought of the team first. Rowe was also courageous, playing for many years with an arm guard after a football injury necessitated him having 12cm (5in) of bone removed from his wrist. And he was canny, once bandaging up his undamaged right shoulder to deflect opposition attention from the seriously injured left one that he left unprotected.

All these qualities combined to make him the players’ choice as captain for the 1923 season. But his captaincy lasted only three games. Rowe officially gave up the position because it was affecting his form. In truth, however, his wife had a big say in the decision; she did not like the extra commitments it meant for him at the club!

After a superb season in 1923, Rowe stunned the Pies by leaving to coach in Albury. When his country season finished, he returned for the last two games in dramatic style to try to help Collingwood into the 1924 finals (it didn’t work). For the next two seasons he coached in Wangaratta, where he became a genuine local hero after leading them through 1925 undefeated. In 1927 he came back to Victoria Park for a final two years. He went out in grand style, with a Herculean performance in the 1928 grand final that became known as “Rowe’s Premiership”.

That day he took on the role of protector of Gordon Coventry, who had been struggling in the preceding weeks. Rowe blocked, bumped and haraharassed any Richmond defender who looked like getting near the Collingwood spearhead. Rowe virtually ignored the ball and concentrated only on clearing a path for Coventry. At day’s end Rowe was black and blue but Collingwood had won the flag — and Gordon Coventry had kicked a record nine goals. Coventry said later that Rowe’s performance was a revelation. “No one thought it possible for one man to shoulder such a burden, but Rowe thought lightly of it,” he wrote in The Sporting Globe. ‘The final scores were 13.18 to 9.9, but they could have been reversed only for Percy Rowe.”

With the post grand final praise still ringing in his ears, Rowe, now 32, left to coach Northcote. He was a good coach; strong, disciplined and well respected. Writers said he was “a born leader of men”, and his performances in charge reflected this. His coaching stints included Northcote from 1929-33, Fitzroy in 1935, Carlton in 1937 and Coburg in 1945-46, and brought him two Premierships along the way. But nothing ever surpassed that 1928 game – a truly memorable way in which to end a remarkable League career.