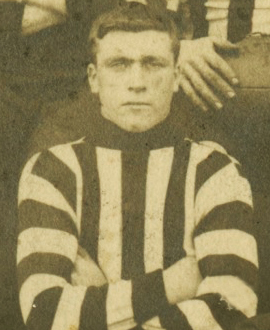 The 1911 Grand Final loss to Essendon must have hurt Collingwood more than most. Not only because it was a nail-biting one-goal margin that followed injuries to two key players, but also because one of Essendon’s best players that day was a bloke the Pies had let go six years earlier.

Percy Ogden had played four successive games with Collingwood late in the 1905 season (he also took part in the controversial trip to Adelaide and Broken Hill in August), but was dropped for the grand final against Fitzroy. The Magpie selectors were apparently concerned that Ogden, and a couple of other youngsters, would succumb to nerves on the big stage. He was not best pleased, and when an offer came from VFA team Preston – where many of his mates were playing – for the 1906 season he jumped at the chance. The Magpies don’t appear to have been overly impressed with his four games and did not stand in his way.

He became a star at Preston, and it seemed only a matter of time before he found his way back to the VFL. In 1909 he joined the Essendon A team in the VFA, and the next year he returned to the VFL with the full Essendon team.

Within just a few games in 1910 it became clear that the Magpies had made a serious error in letting him go. Ogden would go on to play 161 games and kick 91 goals for Essendon, becoming one of the best small men in the game. He captained Essendon in 1919, then captain-coached them in his last two years there, 1920-21. He also captained Victoria, and as late as his second-last season was voted by the public as the best rover in the competition.

As a player he was cool, calm and clever in any situation, and was renowned for always managing to get his kick before being tackled by an opponent. In 1918, the Weekly Timesremarked on his “dashing cleverness, quick judgement and resourcefulness.” “He throws himself whole-heartedly into the game,” it said, “but for all that he keeps his head – and uses it.”

There were times, however, when the small man had to stand up for himself. After one such incident, against Fitzroy late in the 1911 season, Ogden found himself charged by police with assaulting the Roys’ George Holden over an on-field incident (a similar summons was issued to Holden). But luckily the two clubs and two players got together and decided to abandon both cases, sparing Ogden what would have been an unwelcome place in football history.

Small and stocky, Ogden had a rare combination of strength, agility and determination. He was particularly good at positioning himself cleverly to break clear of packs and set up forward moves. He could kick the ball long distances for a small man and was deadly around goals. Supremely fit even late into his life, he could rove all day.

Ogden was born in Sydney, but was brought to Melbourne by his parents when still a toddler. He grew up in Middle Park and then moved to Northcote, where his house would later include both a cricket pitch and tennis court, to encourage his sons to play sport. It was at school in Northcote where he first earned the nickname of ‘Butcher’ that would stay with him for much of his life (apparently it came about because of a blue-coloured jumper he wore to school one day), and with Northcote Juniors where he got his first taste of serious football.

His sons indeed inherited his love of sport, and both would go on to play League football. Gordon played 134 games with Melbourne in the 1930s, while Terry played 18 games with Melbourne and Carlton in the early 1930s, but died after suffering blood poisoning from an injury sustained while playing for the Blues.