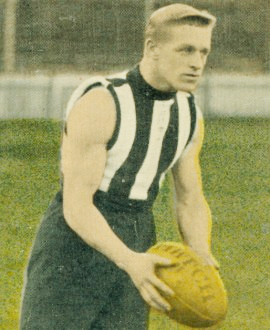 The one-time Magpie skipper was only about 168cm (5ft 6in) tall and, even in those days of smaller footballers, stood out as being undersized. But he was not frail, and his fearlessness, courage and skills more than made up for any lack of height and weight.

In the end, despite his lack of inches – and a run of injuries that would have cruelled lesser careers – he managed a 16-year VFL career during which he tallied more than 200 games with two clubs. And best of all he got to fulfill his biggest dream – leading the Pies to a flag.

Percy Wilson first appeared at Victoria Park for the 1909 pre-season trials, having starred with the Collingwood Trades team (which played in the mid-week industrial competition) in 1908. Although small, Wilson’s performances with the Trades team and then in practice games were simply too good to ignore. The sandy-haired rover was chosen on the Collingwood list and made his debut in only the second game of the season against St Kilda.

He struggled initially but secured his place when he returned to the seniors midway through the season. After his first few games, The Football Follower wrote: “Wilson is just a colt but is a clever little footballer. He handles the ball as much as anybody on the ground, but at times fails to make the best use of it.” Sport newspaper described him as “a smart little player and a nice kick”.

Wilson was a beautiful ball-handler whose control of the leather, even in the wet, was quite remarkable. He had great stamina and was quick, entirely fearless and sure in his play. He was a great possession-gatherer and learned to use the ball well with either foot or hand. Sport once described him as “sparkling and scintillating”. The Star tagged him “the perfect footballer”. “He is dashing and fearless, swift and certain in all his movements, smart in his ground play, clever with handball and a fine kick,” it said.

He also did not mind when things got a bit rugged. “The hotter the struggle the more he likes it,” was one observer’s description. Importantly, he was also consistent, rarely turning in a poor game.

After settling in during his first three seasons, and playing in the 1910 Premiership, Wilson seemed ready to take the next step in 1912, but he missed most of the year with a broken leg. When he returned, he became part of one of the game’s most formidable first ruck divisions, alongside ruckman (and former Collingwood Trades teammate) Les Hughes and Dan Minogue.

After Minogue left for the First World War at the end of 1916, Jock McHale was elected captain of the team for the 1917 season. But he was injured in Round 6 and Wilson was chosen to fill his spot. At the same time, to help give him better control over the game and the players, Wilson moved into the centre. That proved to be a masterstroke, as Wilson lifted his game to a new level. Newspaper reports said that he “beat everything on the football map that season, and was generally adjudged the best man in the League”. One hundred years later, Collingwood would honour him with its retrospective Best Player award for that season.

When McHale returned for the third last game of the season, Wilson wanted him to captain the side. But McHale recognised Wilson’s outstanding performances in his absence and, in a grand sporting gesture, declined the captaincy ­– thus allowing Wilson the eventual honour of leading his team to a Premiership. He led the team again in 1918, but 1919 proved to be a year of disappointments, capped off with the heartbreak of missing another Premiership due to a broken arm. The 1920 season, too, brought its share of mishaps, as he suffered concussion, lost a couple of teeth and injured a shoulder.

At the end of the season he was made a good offer to cross to Melbourne as coach. The offer was tempting, as Wilson was now in the veteran class and his job at the Metropolitan Gas Company was going nowhere. He’d knocked back previous offers from rival clubs, but this time he succumbed. His standing at Collingwood was perhaps best illustrated by the wording of the club’s decision to grant his clearance. “Mr Wilson’s whole heart and soul has been bound up with Collingwood,” the 1920 annual report said. “Your committee has granted him a clearance with willingness, but a lot of regret. Percy remained true to Collingwood when he had opportunities to go elsewhere… and therefore your committee felt that, in his declining years, as a coach and player he should be given every opportunity of making good.”

Wilson stayed at Melbourne until 1924, playing more than 50 games, then briefly joined St Kilda as coach. He went back to Melbourne, spent the next couple of seasons at Murtoa and then two at Port Melbourne. His fitness (which he once attributed to “clean living”, and his refusal to smoke or eat a big meal on the morning of a match) was such that he was still playing good football in his 20th year at senior level. He was never reported, nor even rebuked, by umpires in his career, and was renowned as a kindly man with a warm character.

Over the years the Collingwood fans had developed a special affection for Percy Wilson, partly because of his size, partly because of his terrier-like approach to the game and partly because of his longevity. Their feelings were clearly demonstrated when Wilson first reappeared at Victoria Park in his new colours with Melbourne. Not for Wilson the heckling and jeering sometimes directed at former players. Instead he was accorded a magnificent ovation from the Magpie supporters, being cheered “long and loud” according to one report. Wilson had given his all for Collingwood over 12 years, and that sort of reception was no more than he deserved.