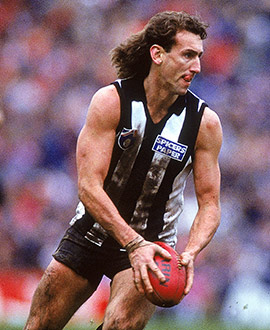 The idol of all Collingwood fans in the modern era.

Daicos originally was a fanatical South Melbourne supporter, but his family shifted from the South zone and Collingwood recruited Daicos from Preston RSL.

Daicos, with his superb ball skills and elusiveness, won Collingwood’s best and fairest in 1982 and 1988. However, injuries possibly cost him other Copeland Trophies as he had several major setbacks (including a knee reconstruction) in his career.

Although Daicos started as a centreman, he soon proved himself uncanny near goals and even played many games at full-forward. He topped Collingwood’s goalkicking in 1981, ’82, ’90 and ’91 and His 97 goals in 1990 was a remarkable achievement considering he was not a specialist full-forward, but played many games in a pocket or on a flank.

In 1991 he kicked a personal best of 13 against the Brisbane Bears.

Born of Macedonian parents in Fitzroy, he quickly became known as the Macedonian Marvel.