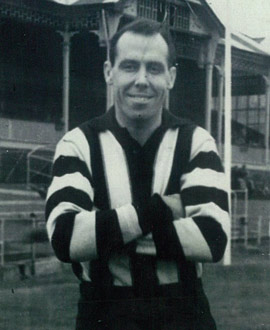 Given that he spent more than 30 years in a variety of roles at Victoria Park, it’s almost inconceivable to think that Peter Lucas was very nearly a St Kilda player.

Peter’s father, George, played 48 games in five seasons with St Kilda in the 1920s, before later captain-coaching Prahran. It was no surprise then to find that Peter was a keen Saints supporter, especially given that he was born and raised in the bayside suburb of Hampton. Naturally excited to receive an invitation to train at St Kilda prior to the 1949 season, Lucas was disappointed to find that his appearance there was greeted with almost total indifference. “I told them my name and other details but nobody did anything about it,” Lucas said years later.

As fate would have it, Collingwood issued a similar invitation the next week. But the reception at Victoria Park was decidedly more professional and substantially warmer. Within hours Lucas knew his football future lay with the black and white stripes of the Magpies.

In some ways football was lucky to have Lucas at all. Had it not been for a family tragedy he may well have pursued a sporting career as a cyclist. In the mid-1940s Lucas had taken up cycling as a track rider with the Hampton Amateur Cycling Club, and proved to be highly successful. His brother also had reasonable success as a road racer. Then one day his brother was killed while riding his bicycle on the road, and Lucas’ distraught father immediately convinced Peter to give away the sport.

Peter refocused his sporting attention on football. He had first played at Hampton High School, mainly as a wingman. After his flirtation with cycling he played football with the Hampton Scouts (an under-19 side) and Hampton Rovers in the A-Grade amateurs, where his performances brought him to the attention of both Collingwood and St Kilda. After his preseason at Victoria Park in 1949, Lucas spent the early games in the seconds before getting his first game on the bench against Essendon. It was a position to which he became accustomed that year, starting five of his six senior games as a reserve. It was a similar tale in the first half of 1950, with Lucas getting only six games of the first 13 — three of those on the bench. But he was in the starting line-up for the last five games of the year, and for every contest in 1951.

From early in his days at Collingwood Lucas settled in to a half-back flank position. A lithe 183cm (6ft) and 79.5kg (12st 71b), he was the tallest of the famed Lucas-Tuck-Kingston half back line, and spent some time in the key position. But mostly it was on the flank, looking after slippery customers like Bob Davis of Geelong and Geoff Tunbridge of Melbourne.

To handle opponents like those two, a defender needed pace, and Peter Lucas lacked nothing in that department. In addition to his speed Lucas was blessed with a high degree of skill, a safe pair of hands and a wonderful sense of anticipation. He was not a “showy” type, and it was often only when it was realised that his opponent had done little that Lucas won notice. Some observers have likened him to an early model (and slightly faster) Shane Morwood. Almost all his former teammates described him as one of the most skilled running defenders of his day.

He didn’t miss too many games through injury, but some of those he did miss hurt deeply. In 1952, for example, he tore a hamstring in the preliminary final against Fitzroy and missed the team’s 46-point loss to Geelong in the grand final. Worse was to come the next year, when he broke his collarbone in the second semi-final and this time missed a Premiership. So he could have been forgiven for treading a little more warily in the dying stages of the 1958 preliminary final.

Luckily the footy gods smiled on him that time, and he was finally able to be a part of not just any premiership team but the fabled heroes who brought home “The Miracle of ’58”. That meant more to Lucas than any individual accolades, but he’d had plenty of those along the way too, including twice finishing runner-up in the Copeland Trophy, losing each time by the narrowest of margins. He was also named vice captain to Bill Twomey in 1957.

He retired at the end of 1959, at the same time as his two closest footballing friends, Ron Kingston and Frank Tuck. But his involvement with Collingwood was anything but finished. After a couple of years coaching at Cheltenham, he returned to the committee to pursue an interest in administration that had started with a stint as players’ representative. In 1966 he became assistant secretary, and a few years later general manager. Peter resigned in 1975 but returned in 1977 and stayed until 1981.

During his time as one of the game’s leading administrators Lucas won a reputation for doing things “by the book”. He also showed many of the qualities that had characterised his on-field performances. He was a gentle man with a wide, ready smile but also with the strong personality needed to successfully assume senior positions in administration. As general manager he proved just as level-headed, reliable and consistent as he had in his playing days.

Collingwood has a proud tradition of its greatest players going on to distinguish themselves in administrative roles after their playing days have finished, and Peter Lucas stands out as one of the most notable examples in this regard. In all, Peter Lucas devoted more than 30 years of his life to the Collingwood Football Club, both on and off the field. That record certainly stamps him as one of the Club’s finest, most loyal and most selfless servants.