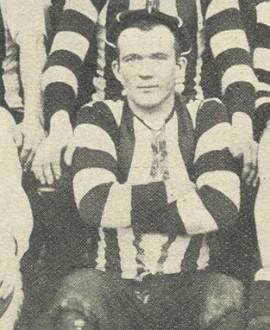 It is January 1917, and the First World War is still raging fiercely. Private Peter Martin is lying in a hospital bed in England, recovering from the gunshot wounds that damaged his head in France a couple of months earlier. Those wounds have caused the loss of his right eye and, on what would later become Australia Day, the wounded soldier is told that he’s to be discharged from the army and invalided home.

It must have seemed like the best news in the world to Private Martin. Sadly, though, his troubles were far from over.

He arrived back in Australia in April, just as the footy season was about to kick off. And initially, you could tell how happy he was to be back. The Sporting Judge described him as being ” minus an eye but cheerful as ever”, while the Winner said: “Among the last batch of returned soldiers is one whom Collingwood supporters and players will warmly welcome. This is Peter Martin, their old wing player, who has returned to Victoria after nearly two years of active service. He received an injury to his head, and unfortunately lost the sight of the right eye. However, he makes light of this misfortune, and as he says is glad to be back again and to have the use of the other one in order to pick out former acquaintances.”

But there were problems with his wounds. His medical reports noted that they hadn’t healed properly before he returned to Australia, and the problems continued after he got back. His condition worsened as 1917 continued, and he died at Caulfield Hospital in March 1918.

It was a sad end to a story that had started out so promisingly for the youngster from Geelong. He’d played with a junior club called Wellington from down that way – a club that also produced Richard and Jack Knell, who played with Richmond and Geelong respectively.

He first came to attention in 1898, when a pre-season kicking competition was held in Geelong between members of the Geelong senior team and representatives of several Geelong junior sides. Martin, Richard Knell and another player tied for first place in the goal-kicking competition out of 14 competitors before Martin won a play-off by kicking three goals from three attempts.

He continued to play well for Wellington and was rewarded with an offer to join the hopefuls at Victoria Park for the practice matches before the 1901 season. He was 25 by this time, and didn’t seem to be overawed by either his surroundings or his teammates. So much so, in fact, that he was named not just on Collingwood’s list but went straight into the senior team for the opening round against Essendon at the East Melbourne Cricket Ground.

Named on a wing, Martin played well that day. The Australasian said he “shaped excellently” on debut. Two weeks later, a journalist noted that Martin was simply “too fast” for his South Melbourne opponent. Two weeks after that, when he returned to his home town to play at Corio Oval, he found himself up against Geelong’s highly regarded Les Bailiff, and the Argus noted admiringly that he “did not disgrace himself”.

Peter Martin wasn’t tall, standing only 5’5″ in the old language, but he had whippet-like speed that made him a difficult customer on the wing, which is where he spent almost all his time in senior football. He was also a fine long kick, had good evasive skills and handled the ball smoothly.

His debut season was interrupted by an injury in the middle of the year, but he showed how quickly he’d become important to the team by returning as soon as he was fit again, and holding his place into the Grand Final against Essendon. He did some “fine runs up and down the ground” that day and was generally considered to have played well in a losing team.

But his opportunities dried up in 1902 and he managed only one further senior game, although he did get to join his teammates on the historic 1902 tour of Tasmania. He crossed to North Melbourne in 1903, where he enjoyed a fine few years – still on the wing – capped off by a Premiership medal in 1904. He then crossed to the Garrison Artillery team for a further four years. In the end, he was 40 when he enlisted in 1915, significantly older than most recruits.

In 2002, author Jim Main, who had written a book called Fallen on footballers who died at war, told Collingwood that he had found Peter’s unmarked grave at Coburg Cemetery. The club arranged to have a memorial headstone placed there. In another lovely touch, Peter’s great-great-grandson, Andrew Pearson, was given the honour of tossing the coin at that year’s Anzac Day game. Coming 100 years after Peter Martin’s last appearance in the black and white guernsey, there could not have been a more fitting acknowledgement for one of Collingwood’s own ‘fallen’.