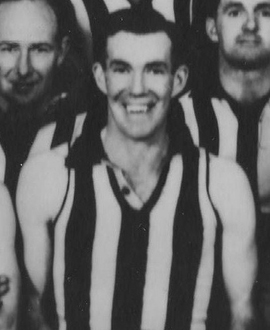 Sometimes it just takes the smallest twist of fortune to shape a promising football career one way or the other. And in the case of Peter McLaren, that twist may well have come behind the wheel of his car.

It was back in May of 1945, and McLaren had just made his senior debut for the Pies in the Round 7 clash against St Kilda. The 22-year-old from Glen Alvie, in Gippsland, had had a few problems getting a clearance, and the paperwork had only been approved on the Thursday before the game. That very night the Pies named him as a follower against the Saints at the Junction Oval.

McLaren did reasonably well on debut. He didn’t make it into the best players but did feature in several important passages of play, including one that that led to a goal for Alby Pannam. Nevertheless he was dropped for the next week, as a host of bigger names returned from injury.

That’s when fate intervened. McLaren was driving to Melbourne from the family farm the following Saturday, presumably to take his spot in the reserves, when his car broke down. The Argus reported on the incident the following week, noting that it had taken him the rest of the day to make his way back home. The newspaper also reported that he wouldn’t be available for the following week.

And that, in a nutshell, was Peter McLaren’s League career. He never played for Collingwood’s seniors or reserves again. He did make another appearance at pre-season training in 1946, the Pies having convinced the reluctant farmer to have another crack. But it never led anywhere.

Instead, McLaren returned to his farm and a highly successful country sporting career. He would later tell family and friends that he didn’t love the city, and that the commute from Gippsland for matches and training was just going to prove too hard.

For Collingwood, that mechanical breakdown could not have come at a worse time, especially with a player who was already unsure about whether he wanted to play in Melbourne. In the end it played a part in depriving the Pies of a highly talented prospect.

McLaren was an outstanding country footballer who could play forward or back with equal effectiveness. He was a good height and well built but extremely athletic (he was also a highly talented cricketer, golfer and tennis player). He frequently played off half-back but also filled key posts at times. Those who saw him play recall his poise and balance, and his lovely raking left-foot kicks: he was renowned locally as one of the few players who could drop kick even a wet ball with distance and precision.

McLaren spent three years at Glen Alvie, then crossed to Dalyston as captain coach and led them to back-to-back flags in 1949 and 1950. He then returned to Glen Alvie for a further four seasons, playing in two more Premierships. In all he played 130 games for Glen Alvie and in 2017 was named on a half-back flank in their team of outstanding players from the post-war period.

Nobody is quite sure how he came to Collingwood’s attention in the first place, but he’d served in the navy in the Second World War (his brother Gilbert died while fighting in New Guinea in 1944) so may well have played some services football with other serving Magpies.

However it came about, he got his chance and did enough to suggest he had the potential for a League career. But like so many country footballers of his day, in the end Peter McLaren opted to stay home. And his local community of Glen Alvie was the real winner from that decision.