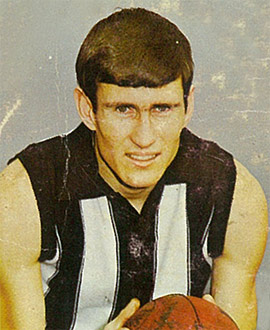 Collingwood’s visit to Horsham in June of 1964 to play a combined Wimmera League team, coached by Hawthorn’s legendary John Kennedy, ended up being much more than the country goodwill visit it was meant to be. For there was an 18-year-old kid on the wing for the locals who really turned heads in the Magpie camp.

That kid was Peter Patterson. He played well that day – very well – against the experienced Brian Gray. The report in the Collingwood newsletter that followed said Patterson had “played a wonderful game” and was a “definite future prospect” for the Magpies. After that, the Magpie scouts started paying him more attention. They were still paying attention later that year when he became the youngest player to win the P J Toohey Medal as the Wimmera League’s best and fairest player.

After that, the Magpies swooped. Richmond had already been in touch with Patterson in 1963, and several other clubs had followed throughout 1964. But luckily for Collingwood he had been a diehard Magpies supporter from a very young age, and had been privately disheartened that the Pies had not been among the clubs to show interest. So he could scarcely sign quickly enough when his boyhood club came calling at the end of the 1964 season.

Peter grew up and went to school in Hamilton, attending the famous footballing nursery Monivae College. Remarkably, he couldn’t get a game there because he was “too scrawny” at the time! Instead he played under-16s at Penshurst (where he won the best and fairest) and under-18s for St Mary’s in Hamilton. Luckily he experienced something of a growth spurt around age 15 and his footy skills began to flourish. He moved to Nhill with his bank job and continued his football there with the local under-16s and reserves, then made his way into the seniors in 1963, and by 1964 was an integral part of what became Nhill’s first Premiership team.

As his performances in 1964 had shown, he was ready for new challenges and he made the move to Victoria Park in 1965. He settled in quickly, making his debut in the #36 jumper from the bench against Geelong at Kardinia Park in Round 4 after just a few games with the seconds to settle in. He only came on in the last quarter of that game but by the next week against Carlton he was on the wing, and that’s where he quickly became a regular.

Patterson was ideally suited to that position. He was a long-striding player with plenty of pace who loved the open spaces (partly why he played so well at the MCG). He was a wonderful, long, left-foot kick – particularly adept at drop kicks, and very handy for quickly getting the ball down to Peter McKenna in the front half. Although quite lightly built he was also a very good tackler, was a good reader of the game and was a clever footballer who could work his way out of tight confines but also knew where and when to run to create space for himself.

Patterson played nine senior games on the trot after his debut, and another one late in the year for what was an encouraging first season. There was a nice moment of symbolism in 1966 when he was given the #17 previously worn by one of his childhood heroes, another left-footed wingman in Thorold Merrett. He had an injury-interrupted campaign that year but was brilliant in the finals, being among Collingwood’s best few players both in the second semi and also on Grand Final day, when his 18 kicks were the second most by any Magpie behind Des Tuddenham (a performance for which he won a golf buggy and golf balls from the club).

The 1967 season was his most consistent, notching 17 games and making the wing spot his own. At the end of that year he was chosen as part of the first Galahs side that played Ireland in Gaelic football, underlining his great athleticism and ball skills (he was also chosen to play in the return games in Ireland but the Magpies wouldn’t let him go).

He began 1968 in similarly strong form, but broke his leg when he was kicked on the shin against St Kilda in Round 14 and missed the rest of the year. He returned early in 1969 but was never quite the same player again after that injury, often having to battle recurring hamstring problems. He managed only eight more senior games across 1969-70, then left to join Waverley in the VFA. But that experiment didn’t last long, and he crossed to Box Hill during the year. He played at Ringwood in 1971, retired from the game in 72 and then made a comeback when he moved to Warrnambool in 1973, serving as playing coach at South Warrnambool.

Peter Patterson was a talented and valuable wingman who regularly played his best footy on the biggest of stages, and whose career would surely have lasted more than the 58 games it did had it not been for the broken leg he suffered when he was just coming into his prime.