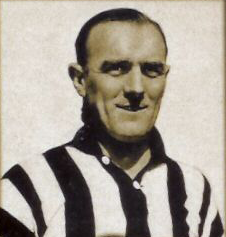 Phonse Kyne was one of the most popular and decorated players Collingwood has ever produced. He played nearly 250 games in 16 seasons (and would have played many more but for the Second World War), captained the side for five years, won the Copeland Trophy three times in succession and was runner-up a further three times. As if that wasn’t enough, he then went and coached the team for 14 seasons, winning two flags and taking his teams to a further four grand finals.

It’s a hugely impressive record – but Phonse (short for Alphonsus) very nearly wasn’t a Magpie at all.

Kyne first appeared at the club in 1933, having established a great reputation as a junior footballer with Parade College and Old Paradians. After kicking bags of 15, 12 and 12 in successive games with Old Paradians in 1933, his father decided it was time for Phonse to try VFL football. He first approached Melbourne – where, ironically, he would have teamed up with a kid he used to play kick-to-kick with, Norm Smith – but the Demons knocked him back! Collingwood, fortunately, welcomed him with open arms.

The Magpies were rewarded almost immediately. He joined late in the year as a 17-year-old and played the last six games with the seconds, kicking 23 goals, including bags of seven, four and five to end the season. Collingwood knew then it had found a player, and he was in the seniors for the opening round of the 1934 season. The Sporting Globereported that he ‘acquitted himself like an old stager’ that day, and he never looked back.

Kyne started his VFL career in one of the toughest positions on the ground – centre half-forward. And he was a natural there. So good were his early performances that within weeks he was being favourably compared to Carlton’s legendary Horrie Clover. He was tall, beautifully built, strong, a wonderful mark and a thumping kick but also mobile at ground level. And he sure knew where the goals were, jagging 89 in his first three years. He finished third in the 1936 Copeland and held down the key forward post in the 1935 and 1936 Premiership sides.

But as Len Murphy moved towards retirement, Collingwood found itself short of big men. So Kyne was moved into the ruck. And while that move proved a huge success – Kyne finished second in the Copeland in both 1938 and 1939 and was regarded as one of the best ruckmen in the game – it also exposed a flaw: the Magpies needed two of him. Whenever he played in the ruck, journalists would report that the forward line was weakened. But if he played forward, or even in defence, the ruck was weakened. The team needed him everywhere.

As a ruckman, he was one of the best. He was mobile for a big man and would cover a lot of territory during a game, doing excellent work around the ground. But the best facet of his ruck play was undoubtedly his artistry in tapping the ball to his rovers. In that he was a master.

Lou Richards, who spent much of his career roving to Phonse, said Kyne used to give him tap-outs “you simply couldn’t believe”. In his first book, Boots and All, Lou wrote:

“Phonse’s secret was that he was a very adept palmer — when he went for a knock-out he always made sure he was in front of his man, and from this position he could palm the ball with either hand, either way, even over the back of his head. All the rover had to do was to give him a call and the ball would be there waiting for him.”

In 1938, the Sporting Globenominated Kyne, Footscray’s Norman Ware and Geelong’s Jack Collins as the three best players of the season. The paper described Kyne as the best ‘all-rounder’ of the season, having been a ‘champion’ in the ruck for Magpies while also starring at centre half-forward in two matches for Victoria.

Kyne quickly became, and remained, a hero of the Collingwood crowds. He was admired not only as one of the fairest players going around, but also for his consistently high output and his absolute refusal to accept defeat. He was one of those players who not only thrilled with the quality of his play but also inspired with his leadership and obvious passion for the Magpies. And the fans loved him. At Victoria Park, they would bellow ‘Phonse!’ in unison whenever he flew for the ball. “It’s as though [they think] Kyne could handle any ten of his opponents,” noted the Argus.

He was an obvious choice as captain when Jack Regan went to the Second World War in 1942, but he played only 10 games that year before heading into service himself. He spent the next three seasons serving his country, playing with services teams, in NSW near where he was stationed and also, occasionally, with Collingwood. But that amounted to only one game in 1943, two in 1944 and none at all in 1945.

So expectations were low when Kyne returned to Collingwood ranks in 1946. He was now 30, and had played virtually no VFL football in three-and-a-half years. Plus experience had already shown that most players returning from long war stints had come back as slightly diminished versions of their former selves.

But not Phonse Kyne. Somehow, the post-war Kyne lifted his game to a new level. As a young and rejuvenated Magpies outfit found itself again in the upper reaches of the ladder, Kyne resumed the captaincy and promptly won three successive Copeland Trophies. It was an astonishing effort, and further entrenched him as the darling of Collingwood crowds.

“Kyne, like Jack Dyer, is an institution,” wrote the Argusin 1948. “He grew up in the Collingwood club, eventually to become a highly respected and popular player-leader, and he can be a match-winner too, veteran though he is. Phonse went into the game a gentleman and he’ll finish that way.”

Kyne’s popularity was graphically illustrated when he was – staggeringly – overlooked for the coaching role when Jock McHale suddenly retired on the eve of the 1950 season. Everyone had just assumed Phonse would get the gig: it was no secret he wanted to coach and he seemed a perfect fit. But when the committee announced that reserves coach Bervin Woods had the job, the members and fans revolted in extraordinary fashion (they mobbed him at a practice match days after the decision, carrying him from the field shoulder-high), forcing Woods to quit and ousting the board members who had made the decision.

While it was messy, the right choice had eventually been made. The Premierships that followed in 1953 and 1958, especially, proved it. But Phonse Kyne, more than anyone, would have hated being in the middle of a bloody Collingwood coaching mess, for nobody loved the club more than he did. The fans had seen it every time he pulled on the jumper, his passion and drive adding to his immense talent to make him a champion player. His family regularly saw it too, and used to recall how hard he would take defeats as a coach, refusing dinner and taking himself off to bed.

Perhaps his attitude is best summed up by long-time rival Jack Dyer, who hated Collingwood but always respected Phonse. “There was never any doubt where Phonse stood,” Jack once told the Sun. “He was Collingwood first, second, third and forever.”

To find out more about Phonse Kyne’s coaching time at Collingwood, click here.