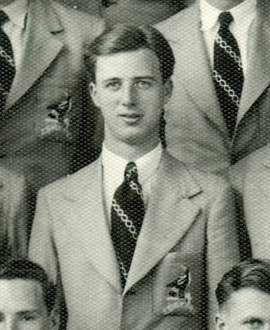 For a guy who would go on to make his name planning things, Ray Jones’ early days in football certainly did not go to plan.

He was born in Geelong but came to Victoria Park in 1943 from St Kevin’s, having played his school footy with CBC in East St Kilda. In January of that year, aged 18, he’d signed up with the Royal Australian Navy. But he still found time to squeeze in a couple of reserves games for the Magpies – in the second of which he had his nose badly broken and didn’t play again for the rest of the year.

In fact, he didn’t play footy seriously again until after the Second World War ended. He served on ships and in depots around Australia while the conflict raged, and was on Board the cruiser HMAS Australia during the Philippines campaign. He played a fair bit of footy in NSW for the Sydney Naval club in 1945. He did well there too, playing mostly at full-forward, snaring a decent number of goals and being chosen in the NSW representative team that played St Kilda.

When the War ended he returned to Victoria, and was approached by both St Kilda (who had obviously liked what they saw in the game against NSW) and Essendon but ended up back where he had started – at Victoria Park.

Newspapers pre-season made much of his success as a forward in NSW and noted that “much was expected” of the youngster. But he managed only one senior game during the home-and-away season, in the middle of the year against Geelong. And even then he only started on the bench, coming onto the ground in the second quarter to replace Allan Knorr and failing to have a significant impact.

So it came as a major surprise when he was returned to the senior team for the finals campaign, having played a superb game in the reserves in the last home-and-away game of the season. He played at centre half-back in the drawn second semi against Essendon, then again in the replay and finally in the preliminary against Melbourne. He did particularly well in the last of those games, with several brilliant marks across half-back and some good kicking out of defence.

He stood between 6’ and 6’1 in the old language and, despite his success as a forward in Sydney, found himself deployed mostly at centre half-back during his VFL career. The key to his game was his marking, which was always solid, and if he could not mark then he usually managed to prevent his opponent from doing so. He made the transition from attack to defence smoothly, showing many of the defender’s ‘safety-first’ instincts.

For a while it looked as if he might not be able to build on his promising end to the 1946 season, with his architectural studies threatening to take him away from Melbourne. But in the end he stayed in the city and enjoyed the most consistent season of his career, playing 13 senior games despite a couple of injuries. But his form dropped away in 1948 and he managed only five further games before being cleared to Melbourne for a solitary game in 1949. He moved to Perth soon after and was a part of South Fremantle’s 1953 Premiership team.

But football had never been Ray’s sole interest – something which he felt might have cost him opportunities at Collingwood. When he returned to Victoria Park in 1946 he took up architectural studies at Melbourne University and he would go on to become one of Australia’s most well regarded modernist architects (while at Uni he had been taught by the great Robin Boyd). He started his own practice when he moved to Perth and was responsible for the development of many significant buildings there. He stayed in WA for the rest of his life.

Ray Jones made his mark on the Australian landscape in a more direct and literal way than most footballers ever get to do, and his time at Collingwood would gradually become a curious footnote in an illustrious professional career. But his time as a Magpie was brought back into focus at the football club in 2020 when he became our oldest living former player.