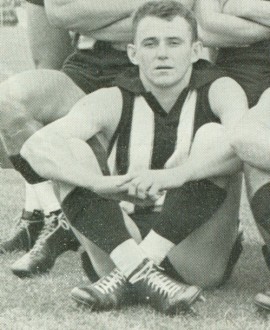 It’s the classic story of the country footballer who came to the city, didn’t much like it, and returned home after one season to be feted years later for his achievements in his home town.

But in Ray Thomas’s case, the accolades that came his way were as much for what he did after he finished playing as they were for what was an indisputably fine country playing career.

Ray was a brilliant, fast and fearless rover with Albury in the famed Ovens & Murray League. He played seniors for his local club at age 16, and by 1960 – aged just 20 – he had won the team’s best and fairest award.

That alerted Collingwood to his talents, and the Magpies were able to convince him to come down to try out during the 1961 pre-season practice matches. It wasn’t easy though: whereas most prospective recruits couldn’t pull the boots on quick enough when given that kind of opportunity, Ray didn’t actually make his way to Victoria Park until the last of the club’s practice matches. He had athletics commitments at Stawell and Bendigo to complete.

But what an impact he made in that game! He played well on the wing, and then was shifted into the centre where he acquitted himself admirably against the bigger, stronger and more experienced Bill Serong. The Magpies signed him up on the spot, immediately asked Albury for match permits and prepared for him to play with the reserves the following week. After just one game there he was named on a wing against Richmond to make his senior debut.

The wing was a slightly odd choice, for Thomas was a natural rover. He had plenty of speed, but was strongly built and could withstand the buffeting in the packs. He got plenty of the football, and also had a good eye for goal when resting in the forward pocket.

He did well against the Tigers in his debut, and The Age named him among the team’s best players in a disappointing loss. But he had been forced from the field in the last quarter with a strained knee, and that kept him out of the next couple of matches. He returned to the team against Fitzroy in Round 5, this time named in a forward pocket as second rover. This game brought his one and only senior goal, and again The Age named him among Collingwood’s best.

Nevertheless he was missing the following week. He returned to the bench in Round 9 but didn’t get on the ground. Remarkably, the same fate befell him the following week too. And that was pretty much it for Ray Thomas’s senior Collingwood career.

He ended the season with 10 reserves games, four senior games (two of which he didn’t even make it onto the ground for) and a handful missed through injury. Even though he’d shown plenty of promise, that must have been a frustrating time. So it was hardly a surprise when Ray decided he didn’t like the city and would head home.

And that’s where his footballing journey really took off. At the ripe old age of 22 he took over as coach at Lavington, and would kick 75 goals for them in 1964. He then returned to his boyhood club Albury, where he would end up playing 197 games, representing the O&M six times and playing in a flag with the Tigers in 1966 (under former teammate Murray Weideman). He also coached Little League, Albury Juniors and Albury Thirds, and most significantly served as Albury seniors’ head trainer for 35 years! By the time he was inducted into the O&M Hall of Fame in 2007 he had devoted more than 50 years of his life to football and the local community.

Ray Thomas became something of a legend in and around Albury, regarded as one of the area’s larger-than-life characters. And not just for his footy either: he was a renowned athletics coach who trained 2000 Stawell Gift winner Jarrem Pearce, among others. Ray’s year at Collingwood became just one part of an extraordinary life in football. And not for the first time, the city club’s loss was the country town’s gain.