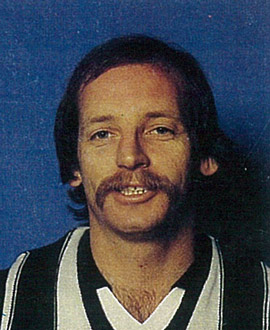 AS a VFL footballer, Ray Byrne was a reliable defender, possessing a blue-collar work ethic, a good football brain and an admirable team-first attitude.

As a teammate, he was much loved … and hilarious.

In many ways, Byrne epitomised the sort of character every footy club needs on and off the field. He was a no-frills, dependable player: a prolific kick winner who loved to dash around the wings and create play. The fact he played in four losing VFL Grand Finals was a cruel part of his CV in a career that took him to three clubs – Carlton, Collingwood and Geelong – playing 219 games across 12 seasons.

But even though he started with the Blues and ended with the Cats, Byrne would always maintain that Victoria Park seemed the most like home. “I loved Collingwood,” he would say proudly. “It didn’t matter if you were in the firsts or seconds, the supporters treated you as though you were something different, something special.”

“The only time you saw a Carlton committeeman was match day or at a special dinner. At Collingwood, you saw the people running the club. Blokes like (former president) John Hickey would come to Sunday training and stay and have a beer.”

Byrne hailed from Carlton’s recruiting goldfields of Bendigo, having attended White Hills Secondary College, and he was a member of Golden Square’s 1972 premiership side. That brought about a move to Melbourne the following season to join the reigning VFL Premiers. He played only one reserves games at the start of 1973 before being brought into Carlton’s senior side. His debut season reaped 16 games, either in the back pocket or on the wing, and his three finals culminated in the Blues’ losing Grand Final side. He would be listed among his team’s best players that day.

He wasn’t always enamoured with Collingwood.

In his third season with the Blues, 1975, he came up against the might of ‘Fabulous’ Phil Carman.

“The year Phil Carman joined Collingwood (1975), a big brawl started and as I tried to ping him, he spun me around and busted my nose,” Byrne would recall. “I don’t know why, but I was near him later in the match and he got me again.”

Worse was to come, however, on Anzac Day that year when he ruptured his bowel while playing for the Blues at VFL Park. He had to be rushed to hospital via helicopter, spent two weeks in St Vincent’s Hospital and did not think he would play again. But just 12 weeks later he made his return in the reserves, displaying the courage that was one of the hallmarks of his career.

After five-and-a-half years and 81 games in navy blue, and midway through a turbulent 1978 season for the club, Byrne sought a new opportunity.

“(Carlton) seemed to be falling apart, so I jumped out,” he said. “Tommy Hafey rang me and asked me to come over to Collingwood.”

His first night at Victoria Park raised a few eyebrows – he wore a Carlton jumper out on the track. But it wasn’t long before he became one of the most popular Collingwood players, among a group of second-chance players who would go on to become part of those ‘Hafey’s Heroes’ teams.

He first wore the black and white against Hawthorn in Round 14, 1978, the first of what would be 121 games with the club, wearing the No.26 jumper. His time at Victoria Park lifted his standing in the game, with the Sun newspaper at one stage labelling him “one of the most desperate and disciplined players in the VFL”.

Byrne played in four successive finals campaigns at Collingwood, including three Grand Finals losses in a row (1979, 1980 and 1981). Mostly used as a back pocket and half-back flanker, and occasionally on the wing, Byrne was a cool customer under pressure, even in the heat of his 22 finals. One of his best performances came when he blanketed Geelong’s Terry Bright in the 1980 preliminary final. That was his best individual season, too, as he finished runner-up to Peter Moore in the 1980 Copeland Trophy, won the club’s most determined award, and was selected to play for Victoria.

“I thought we were going to win in 1979,’’ he told the Bendigo Advertiserof Collingwood’s five-point Grand Final loss to Carlton. “We had a lot of injuries and it cost us. In 1980, no one would have beaten Richmond (the Magpies lost the Grand Final by 81 points). In 1981, I thought we had Carlton. They got two late goals in the third quarter and then they got a run-on in the last quarter. I didn’t walk up to get my runners-up medal. I just walked off the ground. I found it hard to come up after 1981. I never played anywhere near as well after that.”

Byrne was a practical joker of the highest order, bringing humour to even the most awkward of situations. When he played on Kevin Bartlett in the Richmond great’s 400th league game, he congratulated the balding Tiger on his milestone and presented him with a comb with its teeth cut out. In an earlier final against Geelong, he sought to pay a lost bet to Cat Stephen Lunn by pulling out a $50 note from one of his socks.

“I took the $50 out and said ‘Have you got any change on you, Lunny?” Byrne recalled with a smile. “He didn’t know where to look.”

The popular Magpie announced his retirement from league football at the end of the 1983 season, choosing to move down the highway to Geelong. What he hadn’t reckoned on was Hafey’s persuasive powers. His former Magpie coach was now coach of Geelong, and he somehow convinced Byrne to overturn his retirement and play one last season with the Cats in 1984. His 17 games with the Cats took his overall career tally to 219 games, with the most difficult coming against the Magpies at Victoria Park.

“When I was at Geelong, I got a game against Collingwood but I was so worked up I had a fresh air shot from a standing start,” he said. “The people behind the goal square (at Victoria Park) used to call me ‘the Pope’. But when I went back with Geelong they called me a bald-headed bastard. It didn’t matter that I had played for them for five years.”

Byrne’s link to Hafey shaped him as a footballer, and later as a successful coach in country leagues and in Queensland as well as stints as a regional manager of elite under 18s teams.

“Tommy Hafey was terrific,” he would say. “I probably learnt more under him in a year than anywhere else. He was honest and all he wanted you to do was give your best and if you gave 100 per cent and you got a hiding he would never bag you. He was loyal and taught you to respect your teammates, your club and your family.”

The same could be said for Ray Byrne.