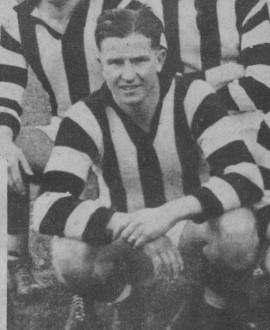 From East Brunswick and Northcote.

Riddell only played five matches in a VFL career interrupted by the Second World War, but he had a front row seat to one of the most bruising finals on record.

He was Collingwood’s 19th man in the 1945 preliminary final against Carlton at Princes Park. Playing only his third match, and his only one for that season, he sat next to legendary coach Jock McHale for most of the match, riding every bump and grind – and there were plenty.

“Jock wasn’t a good loser. Anyway, this particular day we were up against Carlton and I was the 19th man,” Riddell said when quoted for a book on Jock.

“Well, I can tell you that Jock never took his head out of his hands.

“He was biting on his nails, I think. It was a big strain on him.”

Collingwood dominated the opening term, kicking five goals to nil, but by half-time Carlton had cut it back to only nine points.

Once more the Magpies shot out to a big lead of 28 points at three-quarter-time after a five-goal to two third term and their chances looked even more secure when they kicked the opening goal of the final quarter – against the breeze.

But Carlton staged a massive comeback and booted seven goals to only one in the last term to win by 10 points in a clash marred by a number of spiteful incidents.

The Blues won an equally spiteful Grand Final a week later against South Melbourne in what will forever be remembered as “the Bloodbath”.

Born Norman Raymond Riddell, he was known as Ray, and would have almost certainly played more games for Collingwood if not for the war.  He served in the RAAF as a Leading Aircraftman from September 1942 to March 1947.