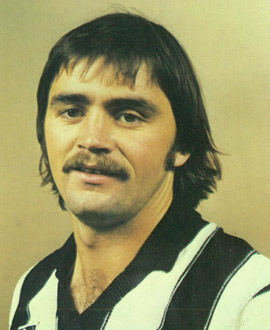 As a boy, Ray Shaw was as diehard a Magpie supporter as you would find. He and his sister Judith would watch Collingwood every week, always getting to the game before the start of the reserves to soak in as much of the week’s football action as possible. When he lobbed at Collingwood in 1974 he was a cheeky 19-year old suddenly thrown in to play alongside his childhood heroes including Len Thompson and the Richardson brothers. Many players in that situation would have been overawed, but not Ray Shaw.

“It was a bit difficult to settle in at first,” he said in 1991. “But I sort of just shoved my own way in. I’ve always been a bit of a talker, on the field and off it, and I didn’t want to just sit in the background like a quiet little mouse. I thought no one would notice me if I didn’t say anything. This was where my big mouth helped me — I seemed to talk to everyone and get on well with everyone, and sort of pushed myself into the club that way.”

On the ground it was much the same. In fact, you could not shut him up. He was always baiting opponents, chatting to umpires or talking to his own teammates. Like Lou Richards 30 years earlier, that was one of the great strengths of his game. “On-field talking is a skill as much as any other part of the game,” he says. “It’s just that it usually goes unrecognised. Even if you don’t get a kick yourself you can still do a heap of good for your side. People don’t appreciate how important talking is, but I reckon it was one of the main features of my game.”

In those ways, Shaw’s self-proclaimed “big mouth” helped him. But it also hurt him. More than once he spoke both frankly and publicly about what he perceived to be problems with the club. He has always believed in speaking his mind, but his comments have not always been well received by those in charge. Some of his most famous outbursts were saved for annual meetings in the early-to-mid 1980s, including one where he questioned the appointment of Leigh Matthews as assistant coach to Bob Rose.

But even if those comments cost him – and Ray’s brother Tony was just one who felt they might have harmed his chances of coaching at Collingwood – Ray was never the type to back away from saying what he felt.

It is that sort of feisty, combative attitude which helped make Ray Shaw such a valuable footballer.

Ray is the eldest of the four Shaw boys, and the competitiveness of their childhood sporting contests is now legendary. None of the boys liked to lose — at anything — and fights were commonplace. The toughness, determination and will-to-win that a background like Shaw’s breeds was all too evident when Ray (and later his brothers) hit the footy fields.

Ray’s earliest football experiences involved filling the role as mascot for VFA team Brunswick, where Ray’s dad, Reg, played. Ray first played as an eight-year old for St Stephens in an under-13 side, then progressed through Keon Park Stars to McLeod/Rosanna in the Diamond Valley League. Even at an early age Ray showed the desperation and competitiveness that was to become a Shaw trademark.

As it became clear that Ray had more than a little talent, he began to set himself goals. His four main ones were to play for Collingwood, to rove to Len Thompson, to captain Collingwood, and to lead them to a Premiership. For a while it looked as if he might not get to first base; as a 16-year old he was turned away by the Collingwood under-19s. Instead he spent two seasons with McLeod/Rosanna, then crossed to Preston in the VFA. So good were his performances that year (1973) that he won the Liston Trophy and was invited back to Collingwood.

Despite an injury-interrupted pre-season, Shaw was included in the senior line-up for the first game of the season against Essendon, and had the pleasure of kicking a vital goal late in the game. It was a good debut season for the plucky youngster, who took off club awards for the best first year player and best player in the finals.

Over the next seven years Shaw won a reputation as a consistent and clever rover/forward. He regularly won a lot of possessions and almost always used them effectively. His skills were good and his disposal first class. Around goal, in particular, he rarely wasted a kick and he was regarded as one of the VFL’s most reliable kicks for goal on the run. He usually produced two or three goals a match, and also had a habit of kicking goals early in games. In fact, there was a dream patch he went through where he kicked the first goal of the match eight weeks in a row! Ray was not outrageously quick (though he was probably still the fastest of the Shaw boys), but he read the play well and quickly developed a good understanding with his long-time idol, ruckman Len Thompson.

He also became famous as one of the select band of players who always wore a long-sleeved jumper, a habit that started in junior football when he was trying to hide his skinny arms. (For the trivia buffs, Shaw once did wear a sleeveless guernsey — for about a quarter, on a wet day when his long-sleeved jumper became too heavy after an all-day soaking.)

At the end of 1977, crushed by the disappointments of that year’s two grand finals, he left to captain-coach in Tasmania: he just had to get away. But Collingwood would not clear him, and after only eight weeks in charge of Devonport he was back.

Strangely enough, the sojourn in Tasmania did wonders for Shaw’s career. As playing coach he had had to do everything he had asked of his players, so he came back fitter than ever. In addition, the break from Collingwood had refreshed him mentally. The end result was his best year of senior football, one which included interstate selection and the coveted Copeland Trophy. When Len Thompson was dumped at the end of that season, it was Ray Shaw to whom the club looked as its next captain.

That meant three of his four ambitions had been realised. The fourth was destined to remain tantalisingly unfulfilled, and eventually passed to his brother to complete. He lasted just two years as captain, losing the post in 1981 to Peter Moore. Ray remained as vice-captain (a little reluctantly) but missed much of the season with a knee injury. At the end of the year, only days after the club’s third straight grand final failure, coach Tom Hafey told Shaw he was too slow and should look elsewhere.

Shaw was shocked and shattered at being dumped by the club he loved so much. He was still only 27, and other VFL clubs were interested. But Shaw could not handle the thought of playing against Collingwood and his old teammates. “I just had too many mates here, and I didn’t want to play against them,” he said. “I couldn’t have stood coming back and playing against them in front of the crowd that had looked after me for so long — that would have been very difficult.” So Shaw turned his back on League football and went to Preston for three years before enjoying stints at Greensborough, Waverley, Oakleigh District, Reservoir/Lakeside and Lalor.

He returned to prominence at Collingwood in the noughties when his sons, first Rhyce and then Heath, became significant figures in the Magpies’ on-field fortunes. As a Magpie through and through, little else could have given Ray Shaw greater satisfaction.