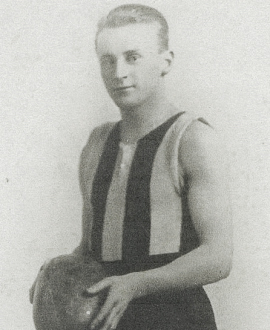 Timing can be everything in football. Reg Baker could surely have attested to this adage in his experiences at the Collingwood Football Club.

A talented, diminutive (163cm) rover/forward, Baker managed to carve out a solid career with the Magpies in the 1920s. He was fast, possessed evasive skills that were honed from chasing his fox terriers around the track and was an exceptional stab-kick to the point where he could knock a bottle off a post from 30 metres away.

Sadly, though, his time at Collingwood coincided with two Grand Final losses, in 1925 and 1926. Baker returned to his hometown of Wonthaggi for the 1927 season when – unfortunately for him – Collingwood won the first of its four successive Premierships. By the time Baker came back to Victoria Park for the start of the 1928 season, Collingwood’s roving division and small forwards were virtually entrenched. Bill Libbis, Harry Collier and ‘Jiggy’ Harris were impossible to displace from their roles.

Baker and his brother Ted were recruited to Collingwood after the Magpies had been sensationally beaten in a practice match against a Wonthaggi Town side in the early 1920s. The Baker boys starred for the Wonthaggi team that day, and were invited to train with Collingwood in 1922. Both worked for the State Coal Mine, so they trained with the local team and travelled by train to Melbourne for match days.

Reg Baker managed 59 games for Collingwood between 1922 and 1926. The Australasian’s Jack Worrall described him as a “brilliant little rover” who was “dashing, fearless and fair”. Ted played 43 games in the black and white, but is best remembered as Geelong’s 1931 Premiership captain. Another brother, Selwyn, turned out for one game with Collingwood in 1934, having played 37 with North Melbourne.

Reg Baker’s second phase at Collingwood was not as successful, lasting just one game in 1928. Family folklore has it that his boss at the time, a Richmond supporter, threatened to sack him unless he transferred to that club. He did just that midway through the season, playing 10 games for the Tigers. Baker then moved back to his home town, where he continued to play football, and coach, for a number of years.

Such was Baker’s love of the game that he became captain-coach of Leongatha in 1934 for “petrol money” and they won back-to-back flags. Baker also coached Morwell and Yallourn later in life, teaching the kids of the region the lessons he had been taught years earlier. Never once did he grumble that timing had not been in his favour at Collingwood. He loved the game too much for those kinds of regrets.