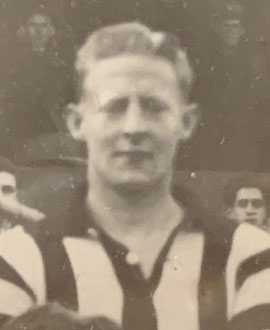 Neither timing nor luck were on Reg Meese’s side during his brief stint at the top with Collingwood in the late 1940s.

The strapping youngster first arrived at Victoria Park in the 1947 pre-season. A local product, he had played his junior footy with Thornbury CYMS and then with Thornbury YCW, where he played in 1945. He seems to have spent the 1946 season with Northcote in the VFA, though no senior games were recorded.

Still, his confidence must have been high, because he was at the time the reigning YCW Golden Gloves Champion. Standing at 6′ and weighing in at 13st 7lbs, he must have been an imposing figure – even before his pugilistic prowess was taken into account.

He made a big first impression on the field during the practice matches too, and Magpie officials were soon briefing journalists that they held high hopes for him to develop as a follower. His clearance from Northcote was announced in the press – although unusually, when the final lists were released, his name appeared under a rarely seen category called ‘For special coaching’ (other future Magpies Keith Batchelor and Pat Twomey appeared in the same group).

But before he could even play a game with the seconds, Reg injured his knee, forcing him out of the game for much of the 1947 season. There are no records of him having played footy anywhere that year, but it’s possible he returned to play some games with Thornbury CYMS. He certainly used the time off to advance his boxing career, and he featured in a number of local bouts, before grabbing the YCW crown.

He returned to Collingwood in 1948, and this time managed to string together a decent run of games with the reserves, leading to his eventual selection for his senior debut in Round 15 against Geelong at Kardinia Park. He was named in the ruck alongside Phonse Kyne that day and the Sporting Globe named him among the Magpies’ best players in a game that looked destined to be a draw until Jack Pimm missed a sitter right on the siren. “Meese impressed in his first game,” the paper said.

Despite Meese’s encouraging debut, he was dropped for the following game as the Magpies brought back two players who had played for Victoria the week before – including star follower Len Fitzgerald.

And that was the end of Reg Meese’s League career. He never got another chance to build on that promising first-up display.

Instead he was cleared to Preston the following April, as part of a deal that encouraged the Bullants to clear ‘Mocha’ Dunstan to the Pies.

He was an excellent player for Preston in 1949, despite a number of frustrating injuries, playing 14 games and kicking three goals. He played mainly as a follower or in the back or forward pockets, where the strong marking and bullocking work that had always been a feature of his game could really come to the fore.

Still just 22 as the 1950 season neared, he seemed set for a long stint at VFA level – and a second crack at the VFL was not unrealistic. But he hurt his hip in April that year, and the next month he walked away from the game, citing “personal reasons”, which turned out to be the need to devote more time to his career with the tramways and his young family.

That family would go on to carry the Meese name with pride. Son John, born just a few months after Reg’s only game with Collingwood, played with Preston (he would be named a Life Member there) and John’s son Nick would go on to win fame as one of the great ruckmen in the VFL in the 2010s, playing with both the Northern Bullants and Williamstown. He was so dominant, for so long, that he was considered desperately unlucky not to have been given a chance at AFL level. Another grandson, Adam Marcon, managed a couple of games with Richmond and was a star with both the Bullants and Williamstown.

Such a wonderful football lineage, starting back in 1948 with Reg and his brief stint at Collingwood. And even though it was only a one-game career, being kept out of the team by somebody as good as Len Fitzgerald must have been some consolation.