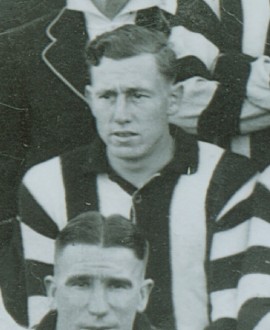 Reg ‘Dodger’ Ryan’s career was severely interrupted by the war, but he still left a large impression as a mean defender – just not at Collingwood.

Originally recruited to North Melbourne from the Victoria Brewery side, Ryan could manage only three games in two years with the Kangaroos before being released. He crossed to Carlton and got no further than the seconds, but starring performances in the Saturday Morning League attracted the attention of Williamstown, and he was cleared there in 1941. When the VFA went into recess for the Second World War in 1942 he briefly crossed back to Carlton, again playing with their seconds. But after just three games with the Blues he was enticed across to Collingwood, making his Magpie debut against Melbourne just two days after his clearance from the Blues came through.

Ryan played half a dozen games for Collingwood in 1942, mostly in defence, and often at full-back. He was a tough, reliable, no-nonsense type who loved the rugged contests so prevalent in that era. But he’d enlisted with the army in that same year (he played in the services football competition while with the Pies) and his service commitments looked likely to signal the end of his League career.

After the War he went back to Williamstown (though he continued to serve with the army until 1948), and played at full-back in that club’s 1945 premiership side. The reports of that year’s VFA grand final say he kicked in beautifully, even with a wet ball, and that the Seagulls “owe a great deal to him for his last-minute dashes and high marking from the goal-line in the last few hectic minutes.”

But in 1946 North gave him a second chance in the blue-and-white stripes, and although Williamstown objected, Ryan crossed back to the Roos without a clearance. He ended up becoming a member of one of the VFL’s toughest and most feared back lines, always being relied upon to carry out a job when it was assigned to him. He played at centre half-back in the losing grand final side of 1950 and ended up totalling 66 games with the Kangaroos. He then briefly acted at playing coach at Preston.