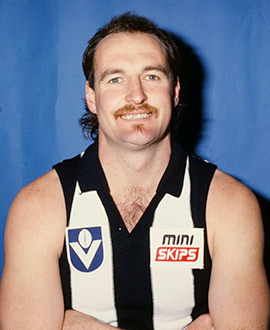 First impressions can be deceptive. Take Ian McOrist. He burst on to the football scene in round seven of 1972, kicking six goals for Collingwood from a half-forward flank against Fitzroy in his first full senior game and immediately being hailed as a new goalkicking sensation. But McOrist disappeared from view almost as quickly as he had arrived, and his first season also proved to be his last. After just 12 games and 16 goals he was gone — a footballing one-hit wonder.

So when, five years later, another youngster came from nowhere to blitz the opposition in his first full game, a few wise old heads recalled McOrist and his impromptu disappearing trick. They need not have worried, for Ricky Barham was not to fade from view until 10 years and 151 games later. And had it not been for a long and frustrating battle with injuries, he almost certainly would not have gone then.

Barham’s sometimes sensational and often frustrating career began dramatically. He had twice started senior games on the bench before being called into the starting line-up against reigning premier Hawthorn for their round nine clash in 1977. Named on a wing Barham set Princes Park alight with a display of scintillating football that had the fans and critics buzzing. He destroyed two pretty handy opponents in Rodney Eade and Geoff Ablett, kicked five stupendous goals — several with banana kicks from “impossible” angles — and helped Collingwood win the game. Even those made cautious by the rapid rise and fall of Ian McOrist could scarcely contain their enthusiasm — Collingwood had found itself a new hero.

But Ricky Barham could just as easily have been spending that fateful Saturday afternoon with a few mates somewhere in Queensland or Western Australia. Only a few weeks earlier, the prospects of a round-Australia jaunt excited him much more than the idea of playing VFL football.

Barham was never one to be captivated by the supposed “romance” of League football, and his background probably has much to do with that. His father, Bill, was reputed to be one of the best country footballers never to play in the VFL. All three of his boys played League football; the eldest, Bill, with Melbourne (after a stint with Collingwood seconds) and Jamie, the youngest, with Melbourne and Footscray.

In the early 1970s Ricky was selected in a special junior skills squad that trained at Collingwood. At home he was still playing junior football and, though promising, he was no star. At 17 he did the primary teacher training pre-requisite year at the Warrnambool Institute, and played with South Warrnambool. This was in Fitzroy’s zone, and the Lions were willing to pay him to stay there for another year to loosen the Magpies’ grip on him.

At the end of 1976 Barham decided he had had enough of schooling for the time being. Some of his mates were moving to Melbourne and he decided to join them. He also decided to ring Collingwood and ask if he could have a kick. But it was hardly a fierce desire that drove him to Victoria Park.

“I was a bit casual myself at that stage” Barham says. “It just wasn’t a big deal to me then. I never thought footy was the be all and end all, and I guess I didn’t really realise the significance of what was happening until later.”

Barham played in one practice match, then decided he and his mates should spend the year seeing Australia. He asked Collingwood for an open clearance, so that he could play some footy on his travels, but the club convinced him to stay and play a couple more practice matches. Even as the 1977 season began Barham was still toying with the idea of a year of travelling, especially when South Warrnambool blocked his clearance for the first game. He played in the second game with the reserves, and did well enough to whet his appetite and keep him in Melbourne. Seven weeks later “Ricky Barham” was the name on every Collingwood fan’s lips.

That first season was truly a memorable one for Barham. After the Hawthorn game he continued to star and was virtually the team’s number one wingman by midway through the season. He won numerous media awards as the League’s best first year player, and also won himself a reputation as one of the game’s greatest crowd-pleasers.

The key to Barham’s game was his blistering pace. Invariably played on a wing, Barham’s scintillating bursts along the wide-open spaces inspired his own teammates and paralysed opposing sides. He also had magnificent ball-handling skills, which he was able to display while travelling at top speed. He was a good mark for his size, with a decent leap and a particular penchant for the diving grab. And did he know where the goals were! He was an outstanding kick for goal on the run and also knew how to craft the clever goals around corners and over his shoulder. So good was his goal sense that late in his career he moved to the forward line and became a dangerous goalsneak.

Peter Daicos once described Barham as “one of the finest wingmen to have played the game”, while Tony Shaw said Barham was one of the most highly skilled players he had ever seen. Both included Barham among the best Collingwood players of their time. And his epic duels with North’s Wayne Schimmelbusch were legendary.

Barham’s attitude to football was both a strength and a weakness. When he first came to Melbourne, League football was no big deal to him and he was never over-awed by it. In those early days he got just as much pleasure from the camaraderie, drinking and knocking about with blokes like Billy Picken, Ron Wearmouth and Stan Magro. The trouble was that this attitude also meant he did not work as hard at his game as he should have in his first years as a VFL footballer. “I was half a hippy in those days,” he said years later, “and it wasn’t until near the end of my career that it began to hit me. I sometimes wonder how good I could have been if I’d worked hard early in the piece.”

But nothing could have prevented the impact that his constant stream of soft-tissue injuries would have on his career. They started in 1979 and never really stopped. Only once in his 10-year career did he string together 10 or more games in succession. The frustration for Barham was immense. He was always capable of playing brilliant football, but rarely consistently or over any length of time.

Into the last few years of his career he became a specialist in the forward pocket or running off the bench, where his skills and goal sense turned more than one game. But in the end the frustration became too much for him and he retired in 1986, at the comparatively early age of 27.

Barham’s last game of football was played in the far north of Australia while on a year off. It was a game played at Port Headland as part of a deal to ensure he found work. He propped in the pocket and kicked 10. In later years he would go on to become the Sydney Swans’ recruiting manager, and in 2009-10 his son Jaxson briefly continued the family tradition with the Pies, playing seven games.

Ricky Barham was an excitement machine during his decade at Collingwood. Look back at the footage of that first game on YouTube and you’ll see a human highlights reel in action. If not for injuries, you can’t help but think that there would have been many more days just like that.