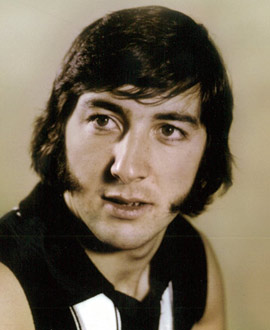 THE ability to play well in a final is an art form; the ability to consistently do it in a losing team – particularly at Collingwood during the 1970s – was even more precious.

Robert Dean was a case in point.

He played in a winning finals match in only his 22nd game for the Magpies. But it was the only time he was able to sing the song from his nine finals appearances, with the most painful defeats including losing what appeared to be the unlosable 1970 Grand Final against Carlton and suffering a similar fate three years later against Richmond in the 1973 preliminary final.

The latter hurt Dean even more than the former, but the result wasn’t his fault. He had 24 disposals in that game and was rated by the Age’sRon Carter as the best player afield. But Collingwood couldn’t stop Royce Hart from almost singlehandedly dragging his team over the line in the second half after trailing by six goals at half-time.

Cruelly, Dean’s finals record of eight losses and only one win – one game was with South Melbourne – sits at odds with his own solid performances in finals. He won Collingwood’s best finals player award in 1972 and 1973, with his attributes – speed, mobility, good marking overhead and a fine kick – suited to the bigger grounds of the MCG and Waverley.

Dean was “a Collingwood boy all his life”, recruited from one of the club’s most productive talent resources, Ivanhoe Amateurs.

He impressed Magpies coach Bob Rose enough to be selected for his first game against Carlton at Victoria Park in Round 16, 1969. The 18-year-old was named on the reserves bench, and that’s where he remained for the duration of the match, which the Blues won by 10 points. (Less than 48 hours afterwards, by way of interest, Neil Armstrong became the first man to walk on the moon.)

The young Magpie took his own big leap in 1970. He didn’t play again for the seniors after that bench-sitting debut in 1969, but in 1970 – in one of the strongest teams Collingwood has ever put on the park – he suddenly entrenched himself as a VFL footballer, playing 22 quality games for the season.

One of the keys to his early success was his versatility. Dean played most often on the wing, where his rangy style could be used to great effect, but his height and overhead skills meant he could also play at centre half-forward. He also spent time in defence. In one early game he was thrown into defence when Ted Potter was injured, and he took on – and “spectacularly” outmarked – Royce Hart. In another, just his seventh game, he was swung to full-forward to stand in for the injured Peter McKenna and promptly kicked six goals against North Melbourne.

The Agesaid of Dean’s 18-disposal, six goals and five behinds effort: “He played the position like an experienced League spearhead and not at all like an 18-year-old newcomer to the Magpie team this season. His 6.5 was a good day’s work.”  He was judged as second best behind ruckman Len Thompson.

But as 1970 progressed – and as Collingwood flourished – he locked down one of the wings and combined to form one of the most exciting centrelines in the game alongside centreman Barry Price, with the sublimely-skilled John Greening on the other wing.

Dean was a strong mark, who could drag the ball down even when trying to match it with taller players going for the grab.

“A tall, wiry type”, as the Football Recordcalled him, he was also an excellent kick, and a mobile player who joked at the time that his fitness came from the fact that he used the stairs to run to the ninth floor at the RACV Building (where he worked in Queen Street) as part of his training routine.

His first final produced a win – against Carlton in the 1970 second semi-final – and he could hardly have believed that he wouldn’t win another game in September.

While Dean’s versatility gave him an early place in the team, it also meant he tended to be thrown around a bit to ‘fill holes’, making consistency difficult to find. One day, when McKenna was off on Victorian duty, Dean filled in again at full-forward at kicked 4.6. In another he found 30-plus possessions from a wing.

His most consistent season came in 1973, when he played 22 games and had almost 400 disposals, which saw him finish third in the Copeland Trophy. He was Collingwood’s best player in both finals that season – 19 disposals and 10 marks against Carlton and 24 disposals and seven marks against Richmond.

The Magpies missed the finals in 1974, and crashed out again to Richmond in the elimination final the following year – in what proved to be Dean’s last game for the club.

An offer from South Melbourne – and some disquiet about his role at Collingwood – saw Dean depart Victoria Park heading into the 1975 season. He would explain: “I had an opportunity to play in a key position – centre half forward – at South. At Collingwood, I played a few good games at centre half forward, but they thought I was better value on the wing. I was under instructions not to go for marks on the wing from kick-ins. They didn’t want me to spoil the big ruckman’s marks.”

Then the Magpies stopped him from preseason summer running sessions with John Toleman at Caulfield racecourse, so he felt he had no option but to make the move.

Initially, he was meant to be swapped for a young hopeful called Colin Hounsell, but that player rejected the move and later went on to play 122 games with the Swans.

Dean had an outstanding start to his time with the Swans. He kicked eight goals in his first game with the club, and then six more against Collingwood the following week. He even led the VFL goalkicking after two rounds. He bore no grudges against his old club, though, and even dropped his kids off at the Collingwood players’ crèche on the day he returned to Victoria Park.

“It was a terrific feeling to be playing against my mates, although they gave me a pretty hard time,” he said at the time. “I couldn’t shut Bill Picken up. He took a mark over me and said ‘Did you see that beauty I took over your head … no, you wouldn’t have as you were underneath me’.”

Dean went on to play 66 games with the Swans, kicking 81 goals, including 37 in 1976, which was South Melbourne’s leading tally for the year.

In all, Robert Dean played 187 games in an impressive VFL career, highlighted by some of his performances in losing finals which stick in the memory of Magpie fans. Some even wondered what might have been had he still been there in 1977, playing on the wing when North Melbourne duo Stan Alves and Wayne Schimmelbusch proved such a handful.