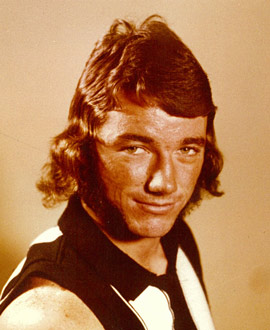 FOOTY can sometimes be a cruel game, as evidenced by the many Collingwood players whose careers were cut short or curtailed by injury. In many ways Robert Hyde was a poster boy for those unlucky Magpies.

Hyde was only 20 – and playing his 20th VFL game – when Hawthorn champion Leigh Matthews fell across his knee during a game at Princes Park in Round 10, 1975. He was told by one doctor he wouldn’t play again, but returned to win the club’s best-and-fairest the following year, establishing himself as a dependable defender displaying leadership and poise beyond his years.

In the end, though, knee injuries would plague him throughout his career, restricting him to only 62 game for the Magpies – and a further one for Essendon – before his VFL career was over. But Hyde’s impact in a relatively short time – and his subsequent contribution to coaching in the years after – left a sizeable impression, including on one player who would play a more lasting role for Collingwood a generation later.

Hyde had been raised close to the Greensborough Football Club ground, where his father had played, and where he would be closely linked throughout his life.

He was only eight when he played in the inaugural Greensborough “Midgets” league (under 13s) before graduating to the under 15s and 17s long before the normal age requirements. He was only 14 years when he started playing his first allotment of games in the under 17s, with teammates saying he “fitted in like a veteran”.

By the time he was 16 he was playing his first senior game for Greensborough seniors in the fiercely competitive Diamond Valley Football League. For a time, he played under the coaching of Collingwood’s 1953 premiership player Neville Waller. He won the club’s best first-year player in his debut year as well as most consistent, and as a 16-year-old was best afield in a final where one of his teammates said he “just stood his ground in the backline, often in the middle of a pack, and pulled down mark after mark.”

Hyde’s form came to the attention of Collingwood, and he was recruited to the club for the 1973 season.

After some good form through the reserves, he was given his chance by coach Neil Mann to play his first game in the Round 8 clash with Fitzroy at Victoria Park. He was only 18, and still a student when he had 17 disposals on debut wearing the No.38 jumper. He was injured in just his second game – an unfortunate portent of what was to come – and though he played only eight further games in 1974, the Pies knew they had found a long-term defender and were prepared to groom him accordingly.

Hyde’s judgement was first class in defence. He played mostly across half-back or in the back pocket: he wasn’t tall enough for a key post but he was a brilliant mark nonetheless who often ‘played tall’. Yet he was also quick off the mark and more than happy to break away from defence with a long clearing kick. Perhaps most importantly of all he was a steading influence in defence even at a young age, showing a poise and maturity that belied his tender years.

Hyde took his game to a new level in the first half of the 1975 season under new coach Murray Weideman. He played the first 10 games of the year, and his steady hand in defence stamped him as one of the team’s best players at the time. Indeed those 10 games were good enough for him to finish runner-up to Phil Carman in the Copeland.

But just as he had elevated himself into an important defender, he was cruelly struck down by a serious knee injury. Hyde ruptured his right knee and ended up in plaster from “waist to toe” for eight weeks. Many thought his football career was finished. Thankfully, Hyde defied the medical assessments, proving his mental toughness by spending much of the summer months with his right leg in a calliper before getting back to training.

By Round 3, 1976, he was back playing in the Collingwood seniors. In a disastrous season for the club, the Magpies ended up being wooden spooners for the first time, but Hyde was a Copeland Trophy winner, a pillar of strength and reliability in the back pocket across 18 games, combining a strong pair of hands, a good kick, solid leadership, a no-frills approach and a fierce determination into a valuable defensive package. He was also awarded the club’s most consistent player and polled nine Brownlow votes.

Hyde maintained the good form as a deputy vice-captain under new coach Tom Hafey in 1977, playing 24 games – his best season return – and was an important player in the finals quest. Mostly, he played on the opposition team’s resting rover, where his stocky frame (85kg) and his size (183cm) came in handy against the likes of Matthews.

As the 1978 season began Hyde had clearly emerged, aged only 23, as one of those club’s young leaders. Then fate intervened again.

In Collingwood’s last practice match, he suffered another knee injury, which kept him out of the senior team for the entire season. He worked hard to fight his way back, playing eight games in the reserves late in the season – to the surprise of his doctors and wearing “a special protective cage” – but was overlooked in the finals.

The Magpies had a clear-out at the end of 1978 and Hyde was – surprisingly – one of the casualties. Essendon gave him a footy lifeline, recruiting him for the 1979 season. But yet another knee injury derailed his season there, until he was a shock selection for the Bombers’ 1979 elimination final against Fitzroy. That was his one and only game for Essendon, and the last of an ill-fated VFL career. He hadn’t even turned 25.

Thankfully, Robert Hyde wasn’t lost to football. He would go on to a long and successful coaching career that took him to a number of clubs including Fitzroy U19s, West Coburg, Greensborough (where he won three flags for his old club), North Old Boys, Bundoora, Calder Cannons, Vic Country U18s and the Northern Blues.

It was his 11-season coaching role with Calder Cannons – where he won three premierships (2001, 2003, and 2004) and was honoured with his name being used as the club’s best and fairest medal – where he had an even bigger impact than his own playing career. While there he oversaw the AFL pathway for countless stars, including Jude Bolton, Dyson Heppell, Paul Chapman and Eddie Betts, to name but a few.

Hyde’s management of a “scruffy” looking kid in the 2001 under 18s season wasn’t easy or straightforward. The kid, according to Hyde, “looked like a bloody Clydesdale … his shorts would be hanging down a bit, his socks would be down.” He was “a low possession forward” with a rebel streak in him before a position switch transformed him. Then a pep talk from Mick Malthouse (organised for the group by Hyde) turned the kid’s form around. He went on to be the player of the TAC finals series.

The kid’s name was Dane Swan, and he would go on to become a Magpies star and a key part of the 2010 premiership side. After all he’d been through, Robert Hyde deserved to leave a bigger legacy at Collingwood – and Swanny provided it.