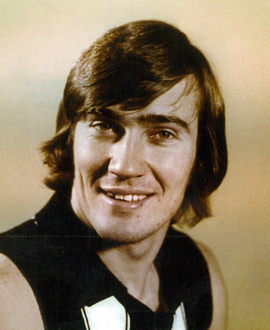 Rod Oborne didn’t quite reach the heights his early promise forecast at Collingwood, but the stylish half forward/utility still managed to make a real impression across six-and-a-half senior seasons.

A winner of the Magpies’ best first-year player, a runner-up to Peter McKenna in the club’s goalkicking award in only his second season, and one of those rare footballers capable of averaging a goal per game, Oborne was a fixture at Victoria Park throughout the 1970s.

The talented left-footer represented Collingwood in 87 games and kicked 85 goals, punctuated by a season playing with Claremont in the WAFL. He also represented Richmond.

Wherever he went, Oborne had an uncanny knack of finding the goals, and was so often compelling viewing.

A crafty player, he was nicknamed ‘Swoop’ by his teammates for his capacity to seemingly appear from nowhere and hoover the ball off the deck in one clean, smooth motion.

The son of a schoolmaster, he had a nomadic early existence with his family. He was born in Devonport, then moved to Hobart, King Island, Perth, Edith Creek in north-west Tasmania and then finally Riana in Northern Tasmania and Burnie, where he went to Marist Brothers College.

When he went to Melbourne in May of 1970 for a tennis tournament, his father wrote to Geelong, St Kilda and Collingwood asking for the chance for his son to train. He had a run with Geelong and Collingwood, and then the Saints later in the year. None showed much interest. But he was already a Collingwood fan so, at the end of his second stay in 1970 he returned to Victoria Park and asked for another chance.

This time it worked, and Rod arrived at Victoria Park for the 1971 season. He played the entire season in the reserves that year, impressing the club’s long-time seconds coach Neil Mann. So it was little surprise that when Mann inherited the senior job from Bob Rose for the 1972 season that Oborne formed a part of the new coach’s plan for a rejuvenated playing group.

A strong preseason saw the half-forward – wearing the No.8 jumper once worn by his idol, Des Tuddenham – chosen for the first round of the season in the Easter Monday clash with Richmond at the MCG. The Age noted: “Newly appointed Magpie coach Neil Mann has not wasted any time in giving the 1972 Collingwood side a new look.”

Oborne was the youngest Magpie that day – at 18 years and 210 days. It wasn’t quite the start he’d been hoping for, having only six disposals and having to go off at half-time injured. But things got better thereafter and he ended up playing 19 senior games for the year, including an outstanding 3.4 against Fitzroy in Round 18.

His form saw him adjudged the club’s best first-year player that season, with The Football Recordsaying he “displayed outstanding form … (as a) dashing player who uses speed and anticipation to win kicks. Excellent kick cannot be left unguarded on flank. Has improved as the year has gone on.”

In many ways, Oborne was the classic half-forward flanker, Elusive, fast, classy, dangerous around goals but prone to inconsistency in what was known as ‘the footballing graveyard’. But he was a dangerous player who opposition teams left unguarded at their peril. He was also a fine mark for his size, and always looked like one of those players who could change the course of a game in a matter of moments.

He started the 1973 season in fine form, kicking 10 goals in the first three weeks and 31 in the first 14 rounds, before ending the year with 39, second only to Peter McKenna. The Age said: “Rod Oborne has become an integral part of the Collingwood set-up. [He is] one of the most dangerous players in the Magpies’ line-up, if let loose for a moment.” He had “great anticipation and football sense as he literally does swoop goalwards.”

Famously, he was pictured in one memorable photo of the time. Oborne was captured almost upside down with the optical illusion of the ball looking as if it was attached to his shoulders in place of his head.

He started 1974 with a four-goal bang against Richmond but the rest of his year was interrupted by injury. The same was true in both ’75 and ’76. After three frustrating seasons, and with the Magpies looking to a different era under new coach Tom Hafey ahead of the 1977 season, Oborne transferred to Claremont in the WAFL, paving the way for Kevin Worthington to join the Magpies.

Oborne played 19 games and kicked 57 goals in his sole season in the WAFL, which made him Claremont’s leading goalkicker.

Given that sort of form, the Magpies wanted him back.

He returned to Collingwood in 1978, managing 15 games and kicking 13 goals. Oborne played three of the first five games with Collingwood in the 1979 season, but finished it with Richmond. A mid-year transfer saw him kick four goals in his first game in yellow and black.

He spent three seasons with Richmond, but only managed five games in that time, including a single game in the club’s 1980 premiership season (in Round 1) – the same year as his son Brad was born.

That wasn’t the end of his time in football, nor his family’s connection to Collingwood.

Oborne would go on to captain-coach Williamstown in the VFA before taking on Ainslie in Canberra where he led them to the 1984 flag. His son would be recruited to Collingwood under the father-son rule in 1998, having graduated from Montmorency and Preston under 18s. Brad played five games for Collingwood – four under Tony Shaw in 1999 and one under Mick Malthouse in 2000 – before being delisted. Like his father, he was a left-footer and knew where the goals were, as evidenced by his three goals against Brisbane in 1999.

Rod Oborne was one of those players who always looked like he might be about to have a breakout season and become a fully-fledged star. And while he never quite reached those heights, a career tally nearing 100 games – and a decent highlights reel – is still plenty to be proud of.