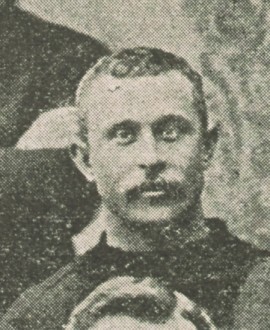 Given the antipathy that existed between Collingwood and Fitzroy in the 1890s, there was actually a surprising amount of player movement between the two clubs in that era. But Roger Lamley was one the Magpies had wished never got away.

Christened Charles Horace Lamley but known in all published references as ‘Roger’, Lamley was born in Richmond, one of 13 children (others had been born as far afield as Tasmania and Adelaide). The family lived in Fitzroy, and Roger and his brothers were prominent on both the football and cricket fields around the area, playing with Fitzroy, Fitzroy Juniors and Fitzroy Imperials at both sports.

By 1890 the 20-year-old Roger was captain of the Fitzroy Imperials. But he crossed to Britannia during the season (the Imps folded halfway through), where he made such a good impression that he won a gold pin from that club for “good play” at the club’s annual smoke night. The next year he moved to North Melbourne in order to experience football at the highest level, and he furthered his reputation with a series of excellent showings.

The newly formed Collingwood Football Club liked what they saw and invited him to join them, and Lamley was part of the starting line-up for the first ever game against Carlton in May of 1892.

Lamley was a fine on-baller, wingman and forward. He had a slightly bandy-legged style of running that sometimes drew critical observations, but that didn’t stop him from being a rapid mover across the ground. He was also a fine ball-handler and a lovely kick. He was very good around goals, and became famous for his skill with the place kick: 50 years later his name would still be mentioned when the best exponents of the art were discussed.

In later years his playing style would be likened to that of the legendary Fitzroy champion Jack Worrall, though Lamley was a little taller and more finely built. He was very good not just at getting goals for himself but also in providing what would today be described as ‘score assists’. He was also an intelligent user of the ‘little mark’

After playing 17 games in his debut season of 1892 (including a best-on-ground effort against his old team, North) Lamley had become an automatic selection and seemed set for a long career at Victoria Park. But eyebrows were raised early in 1893 when he played for local club Clarence in a low-level game against Nunawading the week before the season started. And though he played the first five games of the season, for most of them he was stationed in a forward pocket as the Pies sought to capitalise on his undoubtedly keen eye for goals.

But that apparently didn’t sit well with Roger. Soon afterwards, stories appeared in the press that he was leaving Collingwood, partly “because of dissatisfaction with two members of the team” and partly because he “could not go following”. He crossed to Fitzroy Juniors mid-season, and starred in their end-of-season playoff matches (three separate games ended up being needed to decide the premiership!) against Napier Imperials, kicking three of six goals in one game and the first two of the next.

The Fitzroy senior team already had their eyes on him, and he was seen reciting a ditty called “The Cabin Boy” at the Fitzroy smoke social at the end of 1893. So it was no surprise when he became a senior Fitzroy player in 1894, having been named vice-captain of the combined juniors team that played Essendon pre-season. He ended up going on to be a fine player for the Roys over five years, playing mainly as a wingman. He was part of their 1895 Premiership side and also stayed involved into the VFL era, clocking up 10 games.

Roger Lamley was a quality midfielder with an eye for goal, and the Magpies could certainly have done with him for longer than the 22 games he played in the black and white. In all he ended up playing more than 90 games across eight seasons with North Melbourne, Collingwood and Fitzroy – a fine career.