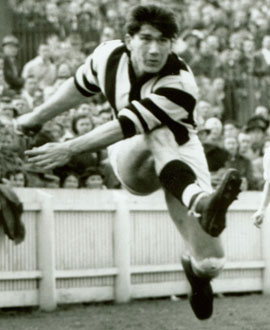 It can’t have been easy trying to make it in League football as Lou Richards’ younger brother.

But Ron Richards was not only able to eke out a long and well regarded playing career, highlighted by a couple of exceptional finals performances, but also a longer and even more respected one as a coach and loyal Collingwood servant. He ended with a lifetime involvement with the Magpies and the admiration and respect of all.

For much of his youth Ron was, as he used to admit, “a little fat kid”, who did not grow until his mid-teens. He did not spend much time with Lou, who was six years older and had his own group of friends. As a result, Ron never really played competitive football as a youngster and for a while seemed unlikely to tread the ancestral path. In the end it was only pressure from his Aunt that saw Lou take him down to Victoria Park for a training run with the seconds.

Though he had little in terms of a track-record to recommend him, Collingwood kept him around largely because of his family’s association with the club. He trained at Collingwood and played with Abbotsford in the sub-district League, where his performances became consistent enough to earn him a spot in the seconds. After a solid 1946 he made it to the senior list the next season, and managed five games in the firsts.

Ron was a very similar sort of player to Lou. Ron admitted he was frightened of no one, and that if he hit someone, he “hit ‘em hard”. Although he was only 170cm (5ft 7in) tall he weighed about 80kg (12st 81b), which meant those hits usually hurt. His play was always vigorous, and frequently crossed the line into ‘dubious’: a backhander to the jaw, a forearm jolt in a tackle or a knee to the lower midriff were all weapons that appeared from time to time.

Ron probably lacked the natural gifts and skills of his uncle Alby Pannam and brother Lou. He made up for it with fierce determination and tons of courage. He was a “burrower”, who loved to get to the bottom of packs and who thrived on the physical nature of the game. He was one who believed strongly in the benefits of team play, and used handball more frequently and effectively than most players of his generation. And significantly, he was a consistent performer in the crunch matches.

In 1951, for example, he was named Collingwood’s best player of the finals, kicking seven goals in two games. And in 1953 he was the unlikely hero of the club’s 12th Premiership. Moved to a wing, Ronnie turned in a blinder, racking up numerous handballs, and with fellow winger Des Healey was generally considered to be the best player on the ground.

Performances like that aside, Ron’s was not a headline-grabbing career. He was an honest, gutsy, consistent team contributor. “Ron was a real Collingwood gutter fighter on the field,” said one former teammate. “You can imagine half a dozen 10-year old kids in the back streets of Collingwood fighting over a footy and Ronnie being in there with socks down, his hair all over the place and a few buttons missing from his shirt. Well that’s the way he played his League football. There wasn’t a lot of style about him but he would fight to the death.”

That was the way he played in every one of his games, which in the end totalled nearly 150. At the end of 1956 he switched to East Hawthorn, where he captained-coached the side in a successful seven-year stint. In 1964 he returned to Victoria Park as coach of the under-19s, taking them to a flag in just his second season. Ronnie then took over the reserves in 1972 (a flag followed in 1976) and stayed in this role until 1981, his only real public recognition coming when he had to fill in for the senior coach on “Coach’s Corner” on World of Sport. In 1982 he served on the committee for a year, and later served an extended stint on the match committee, helping to guide the Pies to the 1990 flag.

In all he was involved with about 1300 Collingwood games in one capacity or another over more than 40 years, his only absences being his years at East Hawthorn and a week he spent on jury service.

The culmination of this lifetime of service to the game came in 1990 when the AFL awarded Ron Richards the Jack Titus award for services to football — the first Collingwood player ever to receive it. That alone speaks volumes for what he has achieved. He may not have done it with the fanfare of his older and more famous brother, but he still won the respect of the football world.