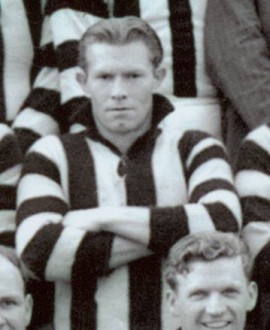 While they might never have captured the same attention as their contemporary colleagues the Richards, the Twomeys and the Roses, there is no questioning the dedication, commitment and talent shown by Collingwood’s less-famous Smith brothers in the 1940s and ‘50s.

Ron, Stan and Jim Smith all gave great service in different ways. But of those three, Ron’s career stands out most as a testament to Magpie loyalty. It’s also a powerful reminder of the impact the Second World War had on so many careers.

The family was originally from the Mallee, but they moved to inner-city Melbourne when the boys were young. Ron was the eldest of the three, and his Magpie journey started in 1937 when he first played for Collingwood Districts (which was then our reserves team), having crossed from either North Fitzroy or Abbotsford (there is conflicting evidence on this).

He spent four years in and out of the seconds, and showed some good form at full-back in the 1940 senior practice matches, after which he was described as showing “great promise”. He also played in the reserves Premiership side that year. But it took until 1941 before he finally cracked it for his senior debut, against Hawthorn in the second round. That was a horror year for the Magpies but a decent one for Ron personally, as he played 13 games in an impressive debut campaign. He was named on the bench for his first game, dropped for the next two, then returned for his first full game against Melbourne in Round 5

Ron was a strong and hard-hitting player who played mostly in the back pocket or on a half-back flank, but also spent time at full-back where he battled against taller opponents. He was an attacking and aggressive player who loved to run and take the game on, and as his career continued he even spent some time on the wing.

But that career would prove to be a very stop-start affair. The main reason was that he served in the army from August of 1940 to September of 1944, as a sapper with the Royal Australian Engineers. This service caused him to miss the entire 1944 season. There were other years where he would play for the Pies while home, but then be sent back to his battle station. He played 13, 10, 8, 0 and 2 senior games in the five seasons the war was raging. There was precious little time to develop consistency.

By the time he returned to the fold full-time in 1946, many other new players had joined the club. He still played 11 senior games that year but only four in 1947. Three of those 1947 outings were worth their weight in gold to him, however, as he was able to play alongside brother Stan for the only times (the third brother, Jim, played only seconds football, and would later go on to serve as a committeeman).

Ron eventually quit senior football in April of 1948, when it became clear that his opportunities would be limited. But this is where his love for the club really came to the fore. Rather than chase opportunities in the VFA or suburban footy, he stayed on to captain the reserves for the next three seasons. By the time he finally left the club in 1951, he’d played over 122 games in the seconds (some of the data from early years is incomplete), to go with his 48 senior games. He also played a lot of footy with the Collingwood team in the fiercely competitive Sunday League, where he got to play alongside both his brothers. (And, in a little known sidelight, made it to the final four of a competition to find Collingwood’s ‘Champion Dancer’ in 1948, where his fellow finalists included Lou Richards!)

In all, Ron Smith played well over 170 games in the seniors and reserves at Collingwood, in a career that spanned 14 seasons. That’s a tremendous record of loyalty and service from an underrated but solid player who, together with his brothers, formed one of the great Magpie families.