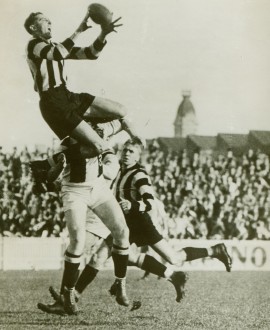 In a ‘sliding doors’ world, we might easily be talking about Ron Todd as the greatest full-forward in the history of football.

He certainly had the talent. And the skills. And the teammates around him. But in the end, a couple of momentous ‘what if’ decisions, combined with the Second World War, cost us the chance to find out for sure.

Ron Todd’s extraordinary career began at Collingwood in the mid- 1930s, but had its genesis much earlier through the club’s first great full-forward, Dick Lee. Todd was born in Collingwood but grew up in Thornbury. His was a Collingwood family and Ron barracked for the Woods from the age of four, going to all the matches with his father.

Ron was really out to see Dick Lee. Lee was a family friend, close enough for young Ron to call him “uncle”, who often came back to the Todds’ place for dinner on Saturday nights. Not surprisingly he became a hero to Ron, who regularly wore to school a Collingwood jumper with No.13 on the back. Lee later said he had seen Todd grow up “almost as an adopted son”.

At both Thornbury State School and Northcote High Ron was considered too small for football, and the frequent rejections actually turned him to baseball for a year. A natural sportsman, he was already showing out as a tennis player and cricketer, and was later to become a handy golfer too. But it was cricket where he achieved his greatest sporting success outside football, winning acclaim for his feats as an all-rounder with Northcote. He maintained his interest in baseball for a while after leaving school, but also took up football again — this time with the Heidelberg Railway team. Now he had filled out to the point where he could hold his own as a centreman, and people began to take notice.

The next year, 1935, he decided to try his luck with the Collingwood seconds, and that is where his football education really started. Under Jock McHale, Hugh Thomas and Ted Baker (seconds’ captain) he progressed rapidly. So rapidly, in fact, that by the end of that season the 18-year old was in the seniors — even if his first game was spent sitting on the bench.

With Gordon Coventry still the best full-forward in the country, Todd had to be content with filling in other positions around the forward and half-forward lines. He used the time to watch and learn from Coventry (even though they were poles apart in playing styles). “I knew that Gordon would have to retire soon, and there and then I made up my mind that I was going to take his place at full-forward,” Todd wrote later.

In 1937 he and Coventry formed a lethal forward combination, with the student kicking 62 goals and his mentor 72. That was Coventry’s last season of football, and he left knowing the full-forward post would be in good hands. Todd’s time as an understudy was at an end.

Ron Todd was a vastly different player to his predecessor, but just as successful. Although taller than Coventry, he was lighter, more frail in appearance and much more agile. He also tended to roam further from the sticks in search of goals. His pace surprised many defenders. He had some success as a professional runner at country meetings and did well at Stawell in 1940. In teams that included such brilliant small men as Alby Pannam, Des Fothergill and Harry Collier, Todd’s willingness to lead was important.

He was also possessed of an amazing leap and a pair of hands which were decidedly sticky. It is arguable if any player in Collingwood history has ever flown for as many ‘speccies’ as Ron Todd: given how few photos were taken at VFL matches at the time, an extraordinary number of great Todd marks were captured. We can only wonder at the countless others that weren’t snapped.

Despite the heights he sometimes reached, he was always beautifully balanced when flying for marks, and indeed at most other points in the game as well. His kicking, however, was prone to occasional problems. He was quite a long kick, but sometimes missed relatively easy shots from close in. Some judges said he was careless in lining up and that he laid back on the ball too much when kicking, faults that produced occasional bouts of inaccuracy — most notably in a game against Richmond in 1938 when he took 17 marks but kicked only seven of 22 shots for goal.

The mantle of champion goalkicker passed as smoothly from Coventry to Todd as it had from Lee to Coventry. Todd kicked 48 goals in the first six games of 1938 and 120 for the season, including 11 in the preliminary final against Geelong. He improved on his season’s tally by one in 1939, and again notched up 11 in the preliminary final, this time against St Kilda. After 241 goals in the last two seasons of the 1930s, the 1940s looked to be his.

And so they were —just not at Collingwood. Prior to the 1940 season, Todd rocked the football world, and especially those elements of it at Collingwood, by crossing to Williamstown in the VFA without a clearance.

At that stage holding down a job in the Railways, Todd was becoming increasingly embittered at what he perceived to be the inadequate returns footballers were getting for their labour. Williamstown’s three-year offer, believed to be for £500 plus match payments two or three times that of Collingwood, was simply too good to refuse. As far as Todd was concerned, this was simply a case of a professional sportsman trying to better his lot.

To the people at Collingwood it was much more sinister than that. They regarded Todd as a traitor. Nevertheless they rejoiced when he appeared in a practice match in April, his mind apparently changed after lengthy meetings with club secretary Frank Wraith. But their joy was short-lived. Todd had already accepted a cheque from Williamstown as a down-payment and, despite the offer of a refund, the deal could not be undone.

He tried to come back again after the war. Todd wrote from Darwin, where he was serving with the RAAF, saying his five years with Collingwood had been the happiest of his life and that he wanted to play with the Pies in 1945. He even made it to a meeting at the club early that year, but was kept waiting so long (apparently because of divisions between officials about whether to take him back) that he felt humiliated and left in disgust. He signed a new contract with Williamstown almost immediately. Collingwood felt it had been betrayed and used to gain Todd a better deal from Williamstown. It expelled Todd from the club and deprived him of “all the privileges of an ex-player”.

Todd dominated in the VFA. In his first game he helped Williamstown to 36 goals (fellow transferee “Soapy” Vallence kicked 15) and took, according to newspaper reports, “the most spectacular mark seen at the ground in years”. He kicked a staggering 188 goals in 1945 — the year he might have been back at Collingwood — and had totalled 672 VFA goals by the time he retired at the end of 1949. He used money from the Williamstown stint to set up a sports store business and later took over a hotel in Lorne.

After leaving footy he ran the hotel for about 15 years before moving to Queensland. In 1963 Todd applied for, and was granted, social club membership at Collingwood. After returning to the fold, he took a keen interest in the past players’ association, and his home at Tugun, between Surfers Paradise and Coolangatta, became a regular haunt for comrades from his playing days. No bitterness remained over his premature departure from Collingwood, a fact reinforced by the deep sadness felt by former teammates and opponents when he died early in 1991. He was inducted into the Collingwood Hall of Fame in 2011 and  the Australian Football Hall of Fame in 2017.

Whenever discussions are held about the game’s great full forwards, Ron Todd’s name will be among them. In the only two seasons he spent solely at full-forward, he averaged more than six goals a game. That’s better than any of the other great full-forwards – Coventry, Lee, Lockett, Dunstall, Hudson, Coleman. And he was just 22 when he played his last game for Collingwood. As his first captain, Harry Collier, said once: “Had he stayed at Collingwood I think he could have been the best of them all.”