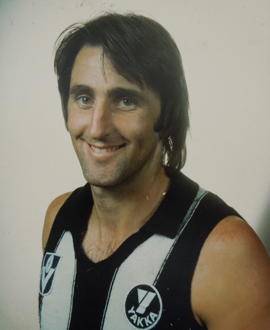 If you’ve never seen the game before, you owe it to yourself to track down a copy of the 1981 first semi-final between Collingwood and Fitzroy. It is a staggeringly brilliant game of end-to-end footy that finishes with the Pies winning by a solitary point, 133-132.

The winning goal that day came from the boot of a player with a family connection unique in Magpie history, Ross Brewer.

Ross’s brother Ian had been a Collingwood full-forward in the 1950s. He had made his debut as a 20-year-old in 1956 and would go on to top the VFL goalkicking in our Premiership year of 1958 before later playing with St Kilda, Claremont in the WAFL and Norwood in the SANFL, amongst others. He finished his top level career with Norwood in 1970.

But by that stage, Ross hadn’t even started his career (it wouldn’t begin until 1971, when he was part of a Melbourne under-19s Premiership side). The reason is that there was a massive 17-year gap between Ian and Ross in the family stakes, Ian being born in 1936 and Ross in 1953 (both, interestingly, Magpie Premiership years). That’s not a VFL/AFL record, which sits at 23 years between debuts and a massive 31 years in age, but it is the largest known gap between Collingwood siblings.

The end result was that Ross only began his VFL career almost a decade after Ian had finished his. And he wasted no time making his mark. 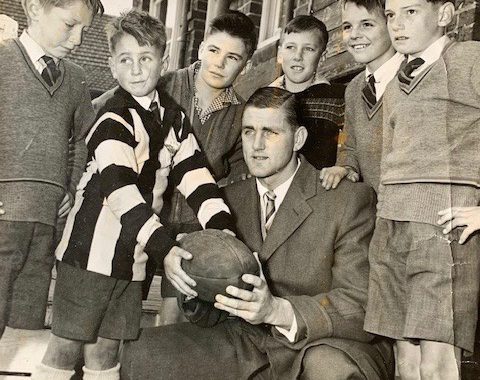 A young Ross Brewer, in Collingwood jumper, shares a footy with older brother Ian, while his schoolmates look on.

A Collingwood fan as a kid because of his brother’s time there, Ross was residentially bound to the Demons. He was a product of the Bentleigh-McKinnon Youth Centre, then came through Melbourne fourths, then the under-19s in 1971 before making his senior debut in the opening round of 1972. He would win the Demons’ best first year player award that year while still a schoolboy at Bentleigh High, and the following year top the club’s goalkicking for the first of three occasions. Overall he played 121 games with the Demons across seven seasons, finishing with 196 goals. He started life as a half-forward flanker but soon became as close as Melbourne got to having a gun full-forward during the 1970s.

Despite a slight frame, Ross most often found himself played as a key forward. He was a lovely footballer to watch – good hands, a really strong intuitive sense of where the ball was going to go, and a fine kick. The Football Record described him as “a magnificent high mark, speedy ground player and an excellent kick.” He was a smart footballer who read the game superbly, and he had an almost laconic air that at times made it look like the game came very easily. But he was also deceptively strong, as you had to be to combat some of the game’s toughest defenders.

After seven seasons at Melbourne, Ross finally got the chance to live out his dream and play with his boyhood club in 1979, as part of a complex trade that also saw John Dellamarta, Wayne Gordon and Phil Carman go the other way. Initially he struggled for game time at Victoria Park in the wake of off-season knee surgery, spending the first part of that year in the reserves. But he made his mark in the back half of the season, kicking seven goals in his first three games and a bag of five in the last game of the year (against Melbourne, of course) after coming off the bench halfway through the second quarter. He also kicked three in the preliminary final against North. He still spent time as a key forward but also found himself back on a flank or pocket at times and it seemed to suit him.

By 1980 he was a fully-fledged member of Hafey’s Heroes, playing 21 of the 22 home-and-away games and kicking 44 goals (including a bag of eight against St Kilda). After he kicked seven against Essendon in the Escort Cup semi-final, Lou Richards in The Sun wrote that he “doesn’t put a foot wrong in the forward line” and was in career-best form. But he would end up missing the finals through injury. He was less productive in 1981, save for a purple patch in the middle of the year when he kicked 18 goals in five matches, and the three he kicked in that memorable first semi against the Lions.

His matchwinner that day was pure Ross Brewer: a long kick from Craig Davis landed almost on the goal line. He flew for the mark, creating the contest, then recovered quickest to grab the loose ball, barely touching it as he instinctively guided it onto his left boot in almost mid-air and sending a kick high over his shoulder to avoid the flailing hands.

It’s often forgotten that, just a minute before that famous goal, he had also set up Peter Daicos for the game’s penultimate goal with a smart pass. And that summed up Ross’s game, really: he was an astute, clever and creative footballer who always knew where the goals were, but was much more than ‘just’ a goalkicker.

Unfortunately his heroics in that game against Fitzroy didn’t carry through to the rest of the finals, and after a quiet game in the Grand Final against Carlton he was released to Richmond. He played six more games there (and also topped the VFL reserves Competition goalkicking table in 1983 with 72 goals), before joining VFA club Sandringham, where he would go on to kick 151 goals in 34 matches, including a 94 goal season in 1984. He captained their 1985 Premiership side before joining Waverley in 1986.

Ross Brewer ended up kicking a lot of goals in a long career across the VFL and VFA. But for Collingwood fans, the one he snatched in the dying seconds of the first semi against Fitzroy in 1981 will live longer in the memory than any of the others.