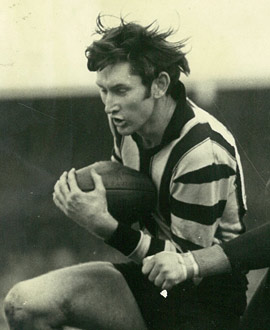 That kick came in the dying seconds of the 1977 Grand Final, when Twiggy marked 20 metres from goal with the Magpies trailing by six points (having led by 27 just 30 minutes earlier). Under almost unimaginable pressure, Twiggy coolly went back and calmly slotted through the tying goal with one of his trademark torpedo punts. It remains one of the most well remembered Magpie moments of the 1970s.

Had the Magpies won the replay, there would probably be a statue of Twiggy Dunne somewhere around Victoria Park. As it is, that moment still does much to sum up his Collingwood career: reliable, no-fuss, always delivered when needed, and an apparent coolness under pressure that few could match.

He came into the team in the heady days of the late 1960s and quickly became a central part of those wonderful Bobby Rose teams, playing mostly as a centre half-forward or forward pocket. He remained a near permanent fixture throughout most of the 1970s.

Dunne grew up in the heart of Collingwood territory, in West Heidelberg, close to future teammates Ricky Watt and Peter McKenna. From an early age he was fanatical about sport, especially football and cricket (and sporting history: he was a bit of a sports nerd). But unlike most of his friends he didn’t barrack for the Magpies, drawn instead to the Bobby Skilton-inspired South Melbourne.

He was tall and strong as a kid – hard to believe of one who was so wiry as an adult that he would be nicknamed after a stick-thin model of the time – and something of a local star. The trouble was that young Ross’s build changed little from his teenage years while those around him grew up and out. His confidence suffered a little with these physical changes and he endured a couple of rough years before finally getting a chance with Collingwood Under-19s in 1966.

A broken leg limited him to just six games with the ‘threes’, and he found the going similarly tough early in 1967, spending time on the bench with the seconds. He contemplated crossing to the VFA for more game time but decided to stick it out, and was rewarded with a sudden burst of form that saw him notch 50 goals from full-forward and win the reserves’ best and fairest award.

More importantly, he was also called up for his senior debut in the last game of the season. His first game was at St Kilda, and he was pitted against the great Bob Murray. He handled himself with aplomb, even after being picked up and tossed around like a piece of kindling by Carl Ditterich. He contributed four goals — a performance good enough for him to retain his place for the first semi-final against Geelong the next week. There he again kicked four goals, and looked quite at home in senior company.

That meteoric rise from reserves’ bench in the seconds to senior debut took just 11 weeks. And those early encouraging performances were the start of a long and consistent senior career for Twiggy Dunne.

Dunne’s fame never quite reached the heights of some of his teammates like Thompson, McKenna, Price, Greening, Tuddenham and Wayne Richardson. But he was a key player in the Collingwood side nonetheless.

At centre half forward Dunne was skilled and creative, and did a lot of the team-oriented things that brought others into the game. Though he spent most of his career in that position he could also drop into the forward pocket, or have a spell in the ruck. He even spent half a season in the back pocket, and a few games at full-back. He rarely took opposition teams apart, but could always be relied upon to kick a few goals, take a few marks and do some of the “heady” things that can help turn games. He was unobtrusive as a footballer, despite his height, and seemed to do everything with a minimum of fuss.

He was a laconic character both on and off the ground; quietly spoken, laid-back, with a sense of humour described by one of his colleagues as being “as dry as a chip”. This was reflected in his style of play. He rarely seemed flustered, even by opposition aggression, and appeared quite unflappable. He always seemed to have plenty of time and rarely got caught. He also appeared almost nerveless, which led many supporters to refer to him as “Mr Cool”.

“I wasn’t overly nervous,” he said years later. “But it wasn’t deliberate, that nonchalance, it just happened. I used to watch myself on TV occasionally and I couldn’t bear to watch how slow I approached the ball sometimes, or how slow I seemed to react. But I was always anticipating what was going to happen next, and I seemed to be able to get away with it.”

His tall, skinny build (he stood around 193cm but weighed only around 83kg) never changed, despite the best efforts of both the player and the club’s fitness staff. And it rarely hampered his football. “He was an incredible player,” said former teammate Barry Price. “He just used to glide around like a big praying-mantis. He always looked a little slow but he was quite beautifully balanced and somehow he never seemed to get tackled.”

Perhaps the highlight of Twiggy’s game was his kicking. He could kick well with either foot, and regularly did well in World of Sport’s Championship Kick. He was probably the last of the forwards to regularly use the torpedo punt kick when shooting for goal. In the hands of the master, the kick could cover enormous distances, and proved unerringly accurate.

But Twiggy’s contribution to Collingwood wasn’t limited to his on-field exploits. In 1977 he started working at the club as assistant to football secretary Jack Regan. By that time Dunne had worked in business administration for Carlton and United Breweries and Safeway, and the prospect of such a job at Collingwood was appealing. So he took the job while he continued to play in 1977. He then retired, but came back to play six more games (for 17 goals) late in 1978. He took over the senior administrative post from Regan that year and remained in a variety of senior roles at the club (including Operations Manager and Administration Manager) until the end of the 1990s.

Despite that service, and a playing career which spanned 12 years and more than 200 games, there is no doubt that Ross ‘Twiggy’ Dunne is best remembered for that one kick in 1977 (he’s never been quite sure why, given that we didn’t end up winning).

But there is a little known footnote to that moment: 15 years earlier, when Twiggy was still a rabid young Swans supporter trapped in a Magpie zone, he told a mate that if he was ever forced to play for Collingwood he would make sure they did not win another Premiership. “If there’s a grand final and I’ve taken a mark and the siren goes I’ll turn around and kick it the other way,” he told his friend.

That friend must have watched the last seconds of the 1977 Grand Final with a peculiarly sick feeling in his stomach. But every other Magpie fan knew the ball was in safe hands: Twiggy Dunne never let us down.