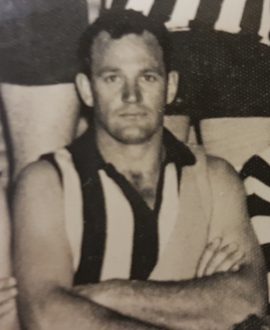 The VFL didn’t attract many recruits from Canberra back in the 1950s. So it’s hardly surprising that when one made his way to Victoria Park for the practice matches in 1952, a confused journalist from The Argus described him as “a half-back from Castlemaine”.

That player was Roy Williams, a defender from Canberra. Even more unusually, he got to play his second game in Collingwood colours closer to home than he might ever have thought likely.

Roy Williams was a star in Canberra, playing with Queanbeyan and Queanbeyan-Acton. He was part of arguably the most famous footballing family in Queanbeyan’s history. He was the youngest of five brothers – Arthur, Ron, Harold and Jim were the others – who all starred with the club.

The others were all part of the club’s ‘threepeat’ in 1939, 40 and 41. They played in Canberra representative teams, and Arthur even played in the Australian Carnival in 1933, setting a benchmark that Roy would match some 25 years later.

Roy had just turned 23 when he came to Victoria Park for the 1952 pre-season. He had played for Canberra in the All Australian Amateur Championships held at the St Kilda ground the year before, having been best on ground in the ruck when Canberra beat South Australia. Magpie scouts were likely in the crowd that day, and he was lured south for a trial eight months later.

Williams did well enough to be named on the club’s senior list, described as “an impressive half-back from Canberra”. He got his first chance on the half-back flank against St Kilda in Round 4 but had little impact and was dropped. Four weeks later he was recalled against Richmond, but with two huge positional shifts.

The first was that he was named at half-forward, expected to also provide some support in the ruck. The second was that the game itself was played in Sydney, the home state of his club Queanbeyan, as part of a VFL initiative to play all their games that round in interstate or regional venues.

Williams obviously felt more at home in all ways in that game. He kicked two goals that day, and followed up with three against South Melbourne two weeks later, two of them from soaring marks.

Marking was one of Williams’ strong suits, along with prodigious kicking. He was well built and fast for his size, and wasn’t afraid to throw his weight around (he was also a promising heavyweight boxer and an outstanding rugby league footballer). When inducting the Williams brothers into Queanbeyan’s Hall of Fame years later, the club would say: “All the William’s boys possessed outstanding skills, being polished ball handlers, with splendid disposal by foot and hand combined with controlled aggression to make them feared opponents of all clubs in the Canberra League.”

That was certainly true with Roy. Unfortunately the chances didn’t quite come his way at VFL level. Although he was mostly a key defender in Canberra, with the ability to be swung forward or even into the middle, he never quite managed to settle on a spot with the Magpies. He was dropped just one game after his three-goal heroics against South, returned to the team a week later for another three-week spell and ended his time at Collingwood against Essendon in Round 15. He showed plenty of good form in the seconds, but ultimately couldn’t find his way back into a team that would go on to make the Grand Final.

By April of 1953 Collingwood had released Roy Williams back to Queanbeyan-Acton in the ACT, where he would resume his glorious local career. He would go on to play just under 150 first grade games, including Premierships in 1953, 54 and 56. He was also in Canberra’s representative side that played in the 1958 ANFC Carnival in Melbourne, where he once again got the chance to rub shoulders with some of the players he’d played both with, and against, during a VFL career that was short but eventful.