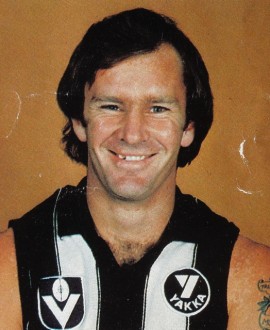 IF it hadn’t been for a wayward forearm which came into contact with his head, Russell Ohlsen might have ended up a Collingwood premiership hero.

Instead, Ohlsen sits alongside a host of other Magpies of the late 1970s and early 1980s who came agonising close to winning a flag, only to miss out.

It’s no exaggeration to suggest the one-time Maryborough player and former Carlton utility was one of the most influential players in the early stages of the 1979 Grand Final. He might even have been on his way to the first Norm Smith Medal had it not been for what happened next.

To that stage he had compiled 11 disposals, kicked a brilliant left-foot snap goal (in the first term) and was a dominant force for the Magpies.

Then, during the second quarter, things went blurry.

A brutal knock to his head from former teammate Trevor Keogh at a crucial stage left Ohlsen reeling and with his jaw aching.

Keogh was reported, with umpire Bill Deller calling it “unduly rough play in that he allegedly knocked (Ohlsen) in the head causing him to go to the ground.” A shaken Ohlsen spent the entire third quarter receiving treatment on the bench, as Carlton swiftly took control of the match. He did return for the frantic final term – where he courageously won four more disposals – but his influence had been curbed, and the Magpies went down by five points.

The fact that his early dominance in that 1979 Grand Final was curtailed still riles some of his teammates. Keogh pleaded not guilty, but admitted the incident looked “pretty bad”. Keogh would receive a severe reprimand, though respected journalist Mike Sheahan would say: “Collingwood players still believe it was a defining moment in the game, given Ohlsen’s inspirational performance against his original club.”

Ohlsen had originally come from the football stronghold of Maryborough, with Lou Richards once calling him “a bow-legged boy from the bush”. He had been recruited to Carlton in 1975, and went onto play 14 games for the Blues that year, including in the qualifying final loss to North Melbourne. The hard-working utility won the club’s best first year player.

He played 17 matches the following year before opportunities began to dry up a little as he struggled to compete with Keogh and Barry Armstrong in terms of locking down a ruck rover’s role. Injuries also began to bite. While he played 13 games in 1977, a knee injury suffered in a night game at VFL Park hindered him (in time it would require surgery).

He managed only three games in 1978, and though he won the reserves’ second best and fairest as well as the reserves’ best clubman, he began to look for fresh opportunities elsewhere. So after 47 games and 25 goals with the Blues, he headed for Collingwood – and its coach Tom Hafey.

He would say: “Tommy was the main reason I joined the Magpies. I had offers from a couple of other clubs, but decided to see what Tommy could do. I have always been impressed with his style. He has a closely knit team at Collingwood; they’re all goers and never frightened to go in.”

“When I went there (Collingwood) they were more of a tight unit, all in together. At Carlton at that time there was a defined group of senior players and you had to prove yourself to them. At Collingwood we were treated the same, from the captain right down.”

He told Lou Richards that he came to love the Friday night phone calls he and his teammates would receive from Hafey on the eve of each game. “It was a little bit funny at first,” he said. “But now I look forward to our little chats and I would be disappointed if we didn’t have it.”

Having missed the first two games of 1979, Ohlsen found his niche through the midfield, and occasionally off half-back, playing 22 matches, including four finals. The solidly built utility Ohlsen often won plenty of the ball, though he could also be used as a tagger. His best spot was probably as a ruck-rover, which allowed his tenacious attack on the footy to be felt at more contests. He wasn’t fast but he was determined, and he came to epitomise the never-say-die approach for which Hafey’s Heroes is still remembered.

Fittingly, he was awarded the club’s most determined player in his debut season. It was well earned, too, given he had carried stress fractures throughout much of the year, often having pain killing injections to play.

The Magpies’ No.34 was popular amongst his teammates, and unmistakable to fans given his tattoos, and his capacity to find the ball. He played another 20 games in 1980, but his form dropped away as injuries hit in 1981 and he managed only eight games. His 50th, and last, for Collingwood came in the semi-final win over Fitzroy, though he only had nine disposals. He was only 25.

Ohlsen went on to join Preston in the VFA in 1982, joining teammate Ray Shaw, winning a flag in 1983. In time, he would go back to play for and coach Maryborough.

He didn’t play as much VFL football as his talent suggested, but to this day, his teammates still talk about what might have been if he hadn’t copped that forearm to the jaw in the ’79 Grand Final.