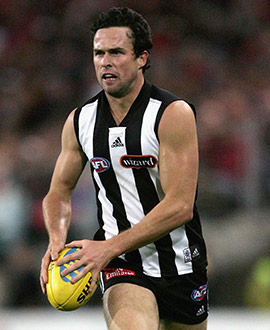 Few players brought the Collingwood crowd to its feet as Lonie did during the early 2000s, when his searching runs down the ground and long left-footed bombs from outside the 50m arc became his trademark.

Lonie arrived at Collingwood via the Frankston Bombers and later the Dandenong Stingrays at the end of 2000 with selection No. 34 in the National Draft, and he immediately made an impression with his foot skills and daring runs from the backline.

A late replacement for the injured James Clement in the heat against Hawthorn in round one, Lonie only missed one match in his debut season (due to a shoulder injury in round 22). His penetrating kicking and silky skills made him one of the most watchable players in Black and White, and he served notice when he played a starring role against Essendon on ANZAC Day when his run off half back caught the more favoured Dons by surprise.

He suffered a touch of the second year blues in 2002 when he was dogged by the dreaded osteitis pubis. Although he was quiet in the regular season, Lonie lifted immensely in September, kicking two vital goals against Port Adelaide in the shock Qualifying Final victory and hitting Anthony Rocca lace-out after a three-bounce run through the centre of the MCG a fortnight later.

Lonie was one of Collingwood’s best players in the epic Grand Final loss to Brisbane, going head-to-head with Lions superstar Nigel Lappin on the wing in wet conditions.

Just as a appeared on the verge of stardom, Lonie’s impact dulled a little in 2003. Although he didn’t miss a game, he lacked his usual spark and verve, but remained a first choice player all season.

After upgrading to the No. 3 following the retirement of Mark Richardson, Lonie again played every game in 2004 but only really got going later in the year when he played further afield, kicking three goals under lights against Port Adelaide in round 21.

Lonie battled in 2005, playing just 10 games before appearing to severely damage his knee against Fremantle in round 18.

He needed to hit back strongly the following year and he did in grand fashion, resuming his permanent place in the line-up when was called upon to perform key tagging roles on names like Anthony Koutoufides and Brad Johnson. He saved arguably his finest performance for the mid-season trip to Sydney when he tagged eventual Brownlow Medallist Adam Goodes, won 23 disposals and kicked two goals in the process.

He began 2007 in the seniors but groin injuries knocked his season off the rails. He returned briefly from rounds 16-18 but dropped out of the side and missed the boat for September.

In 2008, Lonie was superseded by the next generation of Magpie stars, although injury dented his hopes of gaining any continuity in his training.

“I dislocated my shoulder, and I’ve had a couple of runs now, so all I can do now is just keep playing well and keep trying to build up my fitness, and hopefully there’s a spot there, and if there is, there is, and if there’s not, well, there’s not much I can do about it,” he said following a strong performance in the VFL against the Bendigo Bombers midway through the year.

His patience was rewarded with one final showing against Hawthorn in round 18, when he won 18 disposals in a heavy defeat.

Lonie dropped back into the VFL, where he saw out the season under coach Gavin Brown.

He announced his retirement at season’s end and later returned to the Frankston Bombers alongside his twin brother Nathan, who forged a career with Hawthorn and Port Adelaide.