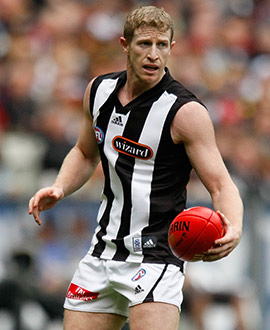 A strong and fearless defender from SA club Norwood.

Collingwood had to wait two years after they drafted Burns for the determined backman to move to Victoria. While the Magpies drafted seven players ahead of him, Burns turned out to be the best of the batch by a long way.

The underrated Burns was runner-up in the best and fairest award of 1996 and there were few players who could match his work ethic. Surprisingly for a player standing just 181 cm, he was second (to Nathan Buckley) on Collingwood’s 2000 marks list.

A determined backman who never gave an inch on the field and was remorseless in applying pressure. By 1996 he broadened his role from being purely a defender to taking a hand in midfield and pushing forward. In that year he represented South Australia for the first time.

The Magpies missed him when he injured his groin in the latter part of 1997 and the bad luck with injuries continued when he broke his arm in the first round of 1998.

Two weeks after his return he was suspended for two games then to continue a horror season he was knocked out when he received the full force of a kick by Nathan Buckley. As a measure of his stature in the club the gritty all-rounder was appointed joint vice-captain in 1999.

He was a fine example for the younger players in the team. Burns missed four games with a hamstring injury late in the year, but still polled well enough in the club best and fairest to run fourth.

He had a solid 2000, but hamstring problems restricted him to eight games in 2001. He returned to fitness in 2002 and his hardness made him a leading light in Collingwood’s great year.