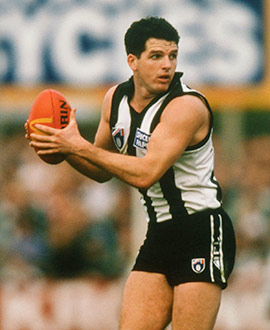 Russell joined Collingwood from South Australian club Sturt without much fanfare but he had a magnificent opening year and showed he was a terrific centre square possession winner as a ruck-rover or centreman.

His pace and class in the midfield was a factor in lifting the Magpies and he had more kicks than any other player in the 1990 flag win. He capped off a fine debut season when he and fellow South Australian Tony Francis won the Harry Collier Trophy as the club’s best first year player.

Russell, who seemed to save his best for big games, ran third in the best and fairest in each of his first three seasons and again in 1996.

A smooth runner with a slightly hunched kicking style who constantly put himself in a position to get the ball, Russell had a mainly injury-free run apart from a bout of glandular fever in 1994.

A dependable kick around the field and a hard worker in the packs his consistency was a pillar of strength during a challenging time at Collingwood in which it figured in just two finals in the 11 years that followed the 1990 triumph.

He represented South Australia eight times in state of origin football and quit Victoria Park when the 1998 season came to a close.

In 2011, Russell was retrospectively awarded the 1996 ANZAC Day Medal as best afield against Essendon with 26 disposals and a goal.