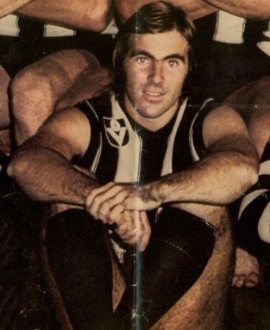 HE’S been the answer to a trivia quiz for four decades, but there was more to Collingwood’s Shane Bond than the one moment most people remember him for.

Famously, Bond was the man who had the ball in his hands – albeit he was in fast motion – when the siren sounded in the drawn 1977 Grand Final between the Magpies and North Melbourne. He had gathered a loose ball at the 34-minute-mark of the final term and taken off with fresh legs, having only come off the bench earlier that quarter. He took three bounces (which came as the siren sounded, although he didn’t hear it) before launching a left-foot kick into attack that statisticians never counted.

It’s among the most famous vision in Grand Final history, and Bond was there, front and centre of the action.

His role as a bench player thrust into games late was something he carried with him for much of his career, but he often made an impact when he got the chance to make his mark. Small, but fast, and a solid left-foot kick who knew where the goals were when resting as a second rover, Bond would go on to play 39 games and kick 29 goals in black and white before playing two more VFL seasons elsewhere.

He had been recruited from Collingwood’s catchment area in the north-eastern suburbs, having played his junior football with West Heidelberg YCW. As a kid with boundless energy, and with good skills, he was invited down to Victoria Park in 1970 and played under-19s football from the outset.

But Bond’s graduation to the senior side would take four years, and in the end his balance sheet would show 28 games with the thirds and a whopping 64 with the reserves. His debut senior match came five days before his 20th birthday, against South Melbourne in Round 11, 1974. Like he did in many matches throughout his career, he started on the bench, before coming on in the last quarter (wearing No.43) to replace Ray Shaw.

He didn’t play a game in 1975, but managed 11 games the following year in the No.15 jumper, playing as a second rover and part-time forward, often again off the bench. He kicked an equal career-high four-goals against St Kilda in 1976, and had 24 disposals against Geelong the following week.

But such bouts of consistency – both in terms of opportunity and performance – were rare. He played the first six games under new coach Tom Hafey in 1977, with a standout performance coming with four goals in an emotional Anzac Day match against Richmond where Hafey was pitted against his old team for the first time. Hamstring issues affected him late in the year, but when Phil Carman was suspended he was brought back after nine weeks for the Grand Final. The Football Record from that game described him as a “clever little relief rover who has plenty of ability. (He) has kicked many goals in the under 19s and reserves. Kicks either foot and is particularly dangerous around goals. Has not had a lot of opportunity, but he’s done the job asked of him when he’s played.”

As a classic Grand Final unfolded, Bond spent the first three terms on the bench, before being ushered into the frantic game 15 minutes in the last term, replacing Graeme Anderson. In what proved to be the last gasp live passage for a game that had so many twists and turns, Bond took hold of the ball on the defensive part of the outer wing and ran with it. Mindful that time was almost extinguished, he had three bounces and threw the ball onto his boot, oblivious to the fact the siren had already sounded.

The game was a draw.

Bond would later recount an extraordinary post-Grand Final moment when Hafey rang Bond’s parents to apologise to them for keeping their son on the bench for so long.

That didn’t change the fact he would do the same the next week. In the Grand Final replay, the 23-year-old came on in the last quarter, having eight touches as the Magpies went down by 27 points.

He played some good footy in the early part of 1978 and, as in 1977, totalled 13 games for the season. But changes were inevitable after the disappointing preliminary final loss that came later in the year and Bond was one of those to be jettisoned, making his way to North Melbourne as part of a deal that got Craig Davis to the Pies. He played nine games there across two seasons for a final VFL tally of 48 games.

Shane Bond may not have been a star but he was a gutsy contributor who always gave his all, and he had plenty of outstanding games along the way – even if the opportunities that came his way weren’t as frequent as they might have been at a lesser club.