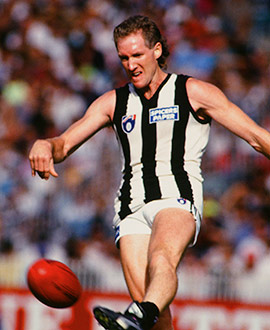 A dependable, classy backman who was an important member of the 1990 triumph.

Morwood had played alongside his brother at South Melbourne but quit the club after it shifted to Sydney and took up residence on a back flank at Victoria Park.

Although he was the lowest profile of several recruits of the time, he proved to be the best acquisition.

Morwood’s tremendous natural skills were complemented by an easy, smooth approach to football.

His running style out of the back line enabled him to launch countless attacks for the Magpies, and under Leigh Matthews’ coaching he developed a tougher edge to his game and became one of the best defenders in the League.

In 1987, Morwood injured the posterior cruciate ligament in his knee on the Tuesday night before the start of the season during a training session at Waverley Park.

It meant he didn’t start playing until round 14, returning on the same day as Peter Daicos who was also recovering from a knee ailment.

“We had a lot of young kids come through at that time and we had a lot of injuries to pretty good senior players which made it pretty hard,” Morwood told collingwoodfc.com.au in 2011.

“We finished down near the bottom, but in 1988 we obviously had a full squad, a few new recruits, and the rest is history I suppose.”

Morwood was a prolific ball winner during the 1990 finals series, averaging 18.0 disposals across the four games including 16 in the decider against Essendon.