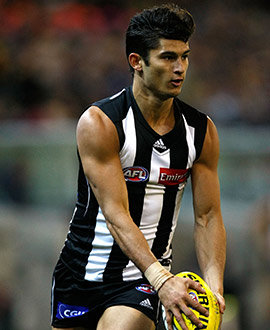 A slippery wingman who enjoyed great success when starting in the centre square due to his ability to clear from the stoppages, Wellingham was one of the faces of the 2010 premiership triumph over St Kilda.

Aged just 22, Wellingham won 20 disposals and kicked two goals in Collingwood’s 56-point win over the Saints which, coupled with his affable personality, meant he quickly won the Magpie Army’s heart.

Wellingham’s career began to take off in the Colts for South Perth in the WAFL, playing three reserves games in 2006. He was named on the wing in the Western Australia Colts Team of the Year and his speed and agility shone through at the state screening.

Arrived at Collingwood with the 10th selection in the 2006 rookie draft, on the same day as Brent Macaffer. Within four years, the two would be premiership teammates.

Wearing the No. 41, Wellingham played 15 senior games (and five in the reserves) for Williamstown at VFL level in his first season. He kicked five goals in the seniors, and was named in the best twice, doing enough to be retained on the rookie list for 2008.

He began 2008 disastrously when he was caught drink-driving in January. It resulted in the club losing its partnership with the Transport Accident Commission (TAC), but he bounced back quickly when he was promoted off the rookie list after Brad Dick was sidelined for the season in March.

Wellingham played in the VFL for the first five rounds but was a late inclusion on ANZAC Day where he looked every inch a league footballer on the way to winning 17 possessions. He was omitted but returned the following week, starting an unbroken six week stint in the seniors. His season peaked in the round eight demolition of Geelong when he won 19 disposals and set a cracking pace in the first quarter with his tackling.

Played a total of 12 senior games, but none after round 21 when he was absent with a groin injury, and was an emergency for three other games.

Wellingham took some big strides in 2009, particularly in the second half of the season. He didn’t get a senior look in until round six when he was a late replacement for Heath Shaw against North Melbourne but only missed four games from there on, and was an emergency for three of them.

Omitted for the Qualifying Final, he was recalled immediately for the Semi-Final where he made an impact with an important goal right on half time. He 20 or more possessions in five games, but never looked completely sure of his place in the senior line up.

Season 2010 loomed as a make or break season for Wellingham, but the slippery midfielder ended the year as a fixture in the team and, more importantly, a premiership player.

He developed into a low profile but highly effective fifth string midfielder, with bigger names such as Dane Swan, Scott Pendlebury, Luke Ball and Dale Thomas stealing the limelight. He missed only two games (due to a calf injury), averaged 19.5 disposals, and 4.0 tackles, and became increasingly important around the stoppages, where he averaged 3.6 clearances.

Wellingham was dangerous around goal, kicking 15.18 for the year and slotting two goals on six occasions. Had at least 20 possessions in each of his first seven games, dominating against Carlton in round six with 23 disposals, two goals and seven tackles.

He broke through for three well deserved Brownlow votes in round 19 against the Cats. His premiership chances looked in danger when he injured his ankle in the Qualifying Final win over the Bulldogs, but he was fit to play in the Preliminary Final where his pressure and ability to find space in attack hurt Geelong dearly.

Like many of his teammates he had a quiet first Grand Final, but returned to form in the Replay with 20 disposals and two second half goals, including one at the start of the third quarter that sparked a five goal rampage.

By now an established figure on the AFL scene, Wellingham was a member of Collingwood’s 2011 pre-season premiership and continued to build his reputation in the regular season. He gathered 26 possessions against the Western Bulldogs in round six and kicked three in the win over Adelaide in round nine.

He saved his finest performance for the Queen’s Birthday when he stepped up in the absence of Swan and Thomas to find a career-high 37 disposals against Melbourne.

His form remained steady for the next month until he strained his groin, meaning he played only one of the next five matches. Was critical to the win over the Eagles in the Qualifying Final with three important goals but struggled to find his best in the two other finals.

His form ebbed and flowed during 2012, a season he began on the sidelines after receiving a two-week club suspension for breaking team rules. He averaged 19.2 disposals from there on, peaking with 24 disposals, 11 tackles and a goal in the thrilling win over Sydney in round 20.

Wellingham kicked two goals in the Qualifying Final loss to Hawthorn and was one of several Pies to play his heart out in the emotional Semi-Final against the Eagles, laying eight tackles.

Wellingham’s time as a Magpie came to an end in the Preliminary Final loss to Sydney, requesting a trade back to his old home state, and he became a West Coast Eagle in exchange for selection No. 18 (Brodie Grundy) in the 2012 National Draft.

His first two years at West Coast were marred by injury and prevented him from showcasing the form that made him one of the most underrated players in the competition from 2010-2011.