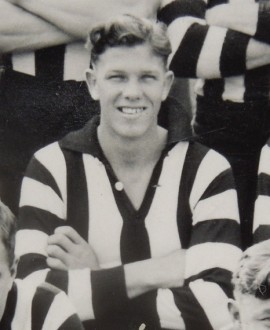 Stan Smith might not have enjoyed a long career at Victoria Park – though nearly 50 games in four seasons is nothing to be sneezed at – but he did get to experience one of the few perks involved in playing for Collingwood in the late 1940s.

In just his 10th game, the speedy wingman/forward kicked four goals against Hawthorn at Victoria Park. After the game, an elderly gentleman came up to him in the rooms and shook his hand. As the man walked away, Smith realised he had 10 pounds in his grasp. The fan was club benefactor and businessman John Wren.

Smith recalled in an interview more than six decades later: “I didn’t know who John Wren was, he came in and shook my hand and he gave me 10 pounds … to me, it was like it was a thousand pounds.”

Unfortunately for Stan Smith, that was one of the rare times when his performances seemed to merit universal approval. Although he was undoubtedly a fine player, he was often the last-in and first-out, meaning he spent most of his time at the club moving between the seniors and reserves. It must have been frustrating for him – and a far cry from how his career started.

Stan’s family originally came from the Mallee but a move to inner suburban Melbourne brought both Stan and his older brother Ron to the attention of Collingwood scouts.

Ron debuted in 1941 and lasted until 1947, totalling 48 games along the way. Stan joined him in 1947 after showing good form for the Collingwood Juniors, although the brothers only managed to play three games together. Another brother, Jim, played with the seconds and would later serve as a committeeman. All three played together with the Collingwood Sunday League team in the 1950s.

Stan was very nearly a surprise selection in the 1946 preliminary final, but selectors in the end opted for Neil Mann, who went on to become a star. But Stan didn’t have to wait too much longer for his own chance, making his debut in Round 3, 1947, as Collingwood’s 500th VFL/AFL player, against Geelong.

The Age noted in the lead-up that Smith was “a player of the dashing and determined type” and was expected to do well on the half-forward line. And that’s exactly what he did, kicking two goals on debut and generally impressing.

It was the start of the best run Stan Smith would enjoy. He played 16 of the 17 games remaining that season – including the unexpectedly profitable four-goal haul against Hawthorn and the team’s two finals. He kicked 10 goals for the year too, and generally seemed to have a fine career in front of him.

The Argus would describe him in this way: “Fairly solidly built, he has played his best football on the wing, where his pace and his ability in the air have been his greatest assets.”

But Smith’s career stalled after that encouraging debut season. He managed only nine games in 1948, then 13 and eight in the following two seasons – missing games through injury, suspension and form. This was a tough time to be a small man at Collingwood, with guys like Lou & Ron Richards, Bob Rose and Des Healey all making their way, and Stan found his opportunities limited.

He played his 46th and final game in 1950, but continued to play in the reserves hoping for a senior call-up, as he desperately wanted a five-year certificate. Sadly, it never came. He would finish runner-up in the reserves best and fairest the following year and ended up playing 57 games for the seconds. He trained at Hawthorn before the 1952 season but wasn’t picked up and ended up plying his trade in the VFA.

A motor driver by trade, Stan Smith was never quite able to steer his senior Collingwood career as far as he would have liked. But 46 games (plus 57 more in the reserves) and 25 goals – and 10 pounds from John Wren – is still a handy footballing CV.