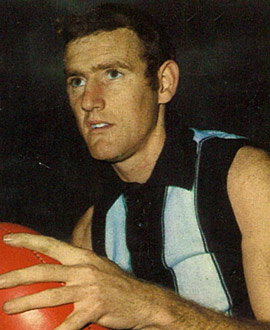 St Kilda’s Darrel Baldock has long been rightly lauded as one of the best players of the 1960s, a wizard with the ball who still remains one of the Saints’ greatest.

But many Collingwood fans – especially those who only watched Magpie games – sometimes struggled to understand what all the fuss over Baldock was about. It wasn’t that they couldn’t appreciate a good opposition footballer when they saw one; it was simply that Baldock rarely seemed to be at his best against Collingwood.

And that is largely down to a quiet, unassuming but determined defender named Ted Potter.

Potter held down important defensive posts for the Magpies for a decade after his debut in 1963. As first a full-back and later a centre half-back he had the misfortune to come up against some of the most brilliant forwards the game has ever known – including famous names such as Carlton’s Alex Jesaulenko, Richmond’s Royce Hart, Geelong’s Doug Wade and Hawthorn’s Peter Hudson. And, of course, Darrel Baldock.

Potter regularly bested or at worst broke even with them all. His battles with Baldock were memorable, and a highlight of the Collingwood-St Kilda clashes of the time. One former teammate said the contests were so engrossing that other players were tempted to just stand back and watch. They would go at each other from start to finish, trying to outwit each other, with Baldock pitting his exquisite skills against the tenacity, determination and close-checking of the Collingwood defender.

Potter loved the challenge of playing on champions like Baldock. And he loved doing so in the big games, too, regularly saving his best for finals and other vital matches. In 1966, for example, he was voted the club’s best player across both finals matches – despite Des Tuddenham’s famous heroics in the second semi-final.

It was those sort of qualities which made Potter a favourite with his coach, Bob Rose.

“He was a coach’s dream,” Rose said in 1991. “He was one of the finest tacklers I’ve seen, played very tight, was quick and a good mark. He was also a fitness fanatic. He is one of the players I rate very, very highly, and I will always remember him for his fabulous performances against the best players in the VFL. I’ve seen him play on Jesaulenko, Hart and Baldock three weeks in a row and beat or break even with every one. And he did it every time he fronted up to them — it was amazing. I know each of those players rated Ted among their toughest opponents.”

That Potter was able to survive regular outings against such stellar opponents with his defensive reputation not only intact but enhanced says much for his standing as one of the game’s best defenders in the 1960s.

Not bad for a bloke whose early footy had been spent as a rover, while playing as a 13-year-old with the thirds for his home town team of Rutherglen. He didn’t have any grand plans for his football then, and didn’t really think of himself as being of VFL standard. He moved to Melbourne to complete high school at about the same time his older brother, Robert, who was a promising footballer, decided to try his luck at Victoria Park. Ted pretty much just tagged along for the ride. Robert made the seconds list but couldn’t be spared from the family farm, leaving Ted to finish high school while living with his aunt in Greensborough. Collingwood asked him to play a couple of games with the under-19s in 1961 as a 16-year-old, but he spent most of that year playing local footy with Greensborough.

In 1962, however, he spent a full season with the under-19s, sometimes on the half-forward flank and later at full-back, finishing second in the team’s best-and-fairest count. He also won McLeod High School’s decathlon championship, and the Northern Division High Schools’ 440 yards title, while also being elected school captain.

Ted was hoping to get a taste of reserves football in 1963, but after starting the season in the thirds he found himself at full-back in the seniors by Round 5! Most of Rutherglen turned out to watch that day as he lined up against Melbourne’s Barry Bourke in a game at Victoria Park. The kid held him to two goals and never really looked back, missing only one game for the rest of the year and winning a £100 award from GTV 9 for the most successful full-back of the season.

And that’s the way things remained for the rest of the decade. At just over 187cm, Potter was a good height for a key defender, and he had a wiry build that made him deceptively strong. He had long arms which came in handy for spoiling, a good and safe pair of hands and outstanding judgement. He was also good at ground level, exceptionally cool under pressure and provided a wonderfully reliable, consistent defensive presence. He revelled in the physical contests, loved playing tight to his man and rarely gave his opponent any breathing space at all. About the only area of his game that wasn’t up to scratch was his kicking, his drop kicks being a particular source of frustration. But he could roost a punt kick when given the chance.

Potter’s off-field persona mirrored the on-field version (though he did suffer badly from pre-match nerves, it rarely showed). A physical education teacher by profession, his two favourite hobbies at the time were fly-fishing and collecting gemstones, the latter of which he would polish and give to friends as gifts. (It’s fair to say this was not the norm in footy changerooms in the 1960s). He was introverted, quiet and unassuming, but universally respected.

In the end he managed 182 games before injuries prompted his premature retirement at the end of 1972, was deputy vice-captain in 1970, represented Victoria, was inducted to the Collingwood Hall of Fame in 2012 and was respected by teammates and opponents alike for his courage, consistency and tenacity. He lived with years of football ignominy for what became misleadingly known as an errant handball in the dying minutes of the 1966 Grand Final against St Kilda, from which Barry Breen scored the winning point (the ball actually spilled free and ‘bobbled up’ to Breen). Typically, the focus on that incident rarely fazed him.

When he retired, Ted Potter took with him a unique record for the longest goal-free career in VFL history – he did not kick a single goal in any of his 182 games. As any Magpie fan of the 1960s would tell you, he might not have kicked any, but goodness knows how many he prevented.