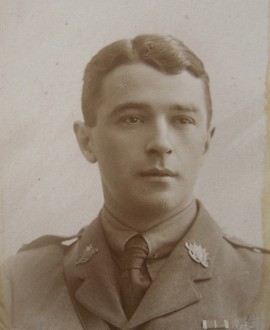 It was hardly enough time for him to have a decorated career with the Magpies.

But his experiences half a world away, and under the intense heat of a battle that came so close to claiming his life, Prendergast would later become one of the most decorated soldiers to have played football for Collingwood. Twice he came under notice of high office in the First World War, and received honours for his bravery, his organisational skills and his coolness under pressure.

Earlier, as a footballer, Ted had been recruited to Collingwood in 1912, having having been born in Newlyn, in country Victoria, and showing promise as a footballer with North Melbourne CYMS. It was a difficult year for the club, and it would ultimately end with the Magpies finishing outside the final four for the first time since joining the VFL in 1897. But Ted’s start was encouraging: he kicked two goals in each of his first two games with the Magpies, the first against Carlton and the second against Richmond, showing some promise as a follower and in attack.

He would also play against Geelong in Round 6 and Fitzroy in Round 8. Unfortunately, he hurt his knee in the match against Maroons, and a career that had started with promise was put on hold for six weeks as he recovered. He returned in time for the Round 15 match against Geelong, and while he could not trouble the scorers in what would ultimately be his last game for Collingwood, the Magpies had a good win.

The following year he moved on to become the captain of the Flemington CYMS side, though he did try out once more for Collingwood during the practice matches of 1915 – without success.

Prendergast enlisted with the AIF in August 1915, and left Australian shores on the Ceramic on November 23. He was 22 when he enlisted as part of the 12th Reinforcements of the 14th Battalion, and by this stage was a law clerk.

When he left Australia he carried with him an inscribed silver cigarette case, given to him just before his departure by his sister Ellen. Little could Ted know that that loving gesture would end up saving his life.

Prendergast ended up heading to France, after doing some training in Egypt, and would serve his country well on the Western Front, to the point where he attracted the attention of his superiors. He first came under notice in April 1917  when he was mentioned in Sir Douglas Haig’s Despatches. Then on the first day of 1918 – the last year of the war – he was awarded the Meritorious Service Medal for his hard work, devotion to duty and his organisations skills.

The citation for his MSM read: “For continuous conspicuous good work and untiring energy during the period 26th February to 20th September, 1917. Staff Sergeant PRENDERGAST has been untiring in his efforts both during active operations and when in the Training areas. His work and untiring energy especially during the operations at BULLECOURT in April, 1917, and MESSINES in June, 1917, during which period he was subjected to a heavy strain which was exceptional and I would strongly recommend him for a reward.’, 1918 – Prendergast would be awarded the Meritorious Service Medal for his hard work, his devotion to duty and his commitment to the cause.”

By July 1918 he had been promoted to Lieutenant, and the war seemed to be coming to a conclusion. But as the Anzacs played a significant role in bringing about last chinks in the German army all across the sectors, Prendergast was badly wounded. He suffered severe gunshot wounds on September 19, 1918, which would end his war just two months out from the Armistice.

His wounds were so serious as to be considered life threatening. He had gunshot wounds to the chest wall and to the left forearm, which was also fractured.

But it could have been so much worse.

One of the bullets struck the cigarette case that Ellen had given him, and which he was carrying in one of his pockets. It shattered the case into pieces, but deflected the bullet away from Ted’s vital organs. Had it not done so, Ted would almost certainly have died.

After being transferred to England, he was deemed medically unfit and his return home to Australia in late 1918 brought about his discharge on medical grounds.

His football days with Collingwood were long gone, but another sporting passion consumed Prendergast for the rest of his life. He would become one of the country’s leading golf administrators. He served as president of the Victorian Golf Association, the Australian Golf Union, and Woodlands Golf Club. He had even been Australia’s representative on the World Golf Council.

Edward Percy Prendergast – better known as Ted – passed away, aged 73, in May, 1967, having survived his brush with death from a half-century earlier, and having lived a long and distinguished life. And he kept that shattered cigarette case for the rest of his life, as a permanent and powerful reminder of how close he came to death, and how in times of war, questions of life and death really do come down to matters of millimetres.