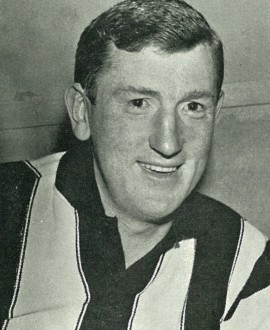 It’s fair to say that Terry Alexander’s introduction to League football didn’t go as smoothly as he might have hoped.

The Thornbury product had established a strong reputation as a big man with Preston in the VFA during the early-to-mid 1960s, having come up through their thirds and reserves. He played more than 50 games in four seasons with the Bullants, including the 1965 Premiership, finished fourth in the Liston Trophy in 1966 and represented the VFA at the 1966 ANFC carnival at Hobart, underlining his reputation as one of the best ruckmen in the Association. By the time the 1966 season finished he was 22 years old, and knew that if he was ever going to have a crack at the VFL, it had to be then.

“I’ve always wanted to have a crack at playing in the League and I’m ready to give it a go,” he told one newspaper. “If I don’t make it now, I never will.”

Luckily, Collingwood was interested in taking the burly follower on board. Unfortunately, Preston weren’t keen to play ball. They initially demanded a $3000 transfer fee, which the Magpies refused. As the 1967 season drew nearer, they dropped their demands to $500, but again the Magpies refused. Alexander was desperate to come to Victoria Park, so in the end he crossed without a clearance. The VFA responded by slapping him with a five year ban.

The unduly harsh penalty was bad enough. But worse was to follow. After encouraging practice match form had pushed him into the frame for selection in the opening game of 1967, Terry broke a bone in his foot in the penultimate practice match and was forced to the sidelines for more than a month.

Terry played a few games in the reserves to regain some fitness, then broke through for his senior debut against Richmond in Round 8. He played only four games that season, but it was soon obvious why the Magpies had brought him in. At the start of the season they described him as “a formidable ruckman and excellent support for Len Thompson” and that’s exactly what he looked like. He stood around 6’5” and weighed around 15 stone, so he was a seriously big unit. The Football Record described him as “a big strong player who takes a good mark.” He was tough, rugged and didn’t mind throwing his considerable weight around, which made him a dangerous opponent in the ruck. He was also capable of taking towering marks and delivering long kicks. With Thommo on board he spent most of his time starting games in the forward pocket (very occasionally in defence)  and taking stints on the ball when Thommo needed a breather. It probably wasn’t making enough of his rucking talents, but he was never going to surpass Big Len in that area.

Terry built on his four-game debut season with 10 in his second, while also finishing second in the reserves best-and-fairest. Strangely his last season, 1969, was probably his most consistent: he played 14 games and kicked seven goals, including a bag of three against South, and grabbed a few mentions amongst our best players. But with Thommo and Graeme Jenkin already ahead of him in the pecking order, and another Preston product in Bob Heard making his way to Victoria Park for 1970, Terry saw the writing on the wall and headed into the country.

He captain-coached Warrnambool from 1970 to 1974, frequently ending up in front of the Tribunal but also making a big impact on the field. Three of his kids would later go on to make names for themselves in elite level basketball and netball.

As Terry Alexander himself said after crossing from Preston, the time was right for him to “have a crack” at League football at the end of 1966. And while he wasn’t a star, he gave valuable service across the next three seasons as a big, tough ruckman/forward who put his body on the line each and every time he played.