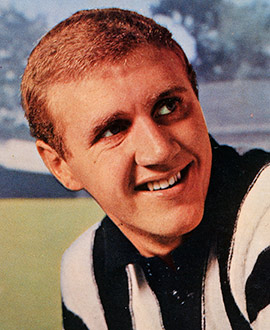 It is a minor miracle that Terry Waters ever played for Collingwood. There were four other clubs chasing him, his brother had played for Hawthorn, he neither supported nor even liked Collingwood, and his VFA club wanted to block his path to the VFL. The major stumbling block, however, was much simpler: his mother hated the Magpies!

The Waters clan’s antipathy towards Collingwood can be traced to brother Bryan’s senior debut for Hawthorn. That game was against the Magpies, and the newcomer was unceremoniously flattened early in the match. After that, the Collingwood name was mud in the Waters’ household. So when Terry and his father headed off to Victoria Park one night to talk to Jack Burns and Gordon Carlyon, it was not surprising that Mrs Waters’ parting words were: “Whatever happens, don’t let him sign with that club”. Her husband confidently assured her there was “no chance” of that happening. A few hours and some persuasive words later Terry returned home a Collingwood player for life.

Fortunately, even Mum had come around by the time of Terry’s first game. That is just as well, because her boy was virtually an instant hero. Playing against North Melbourne in the second game of the year, Terry started off ruck-roving. He kicked a goal, but was switched to full-forward in the last quarter where he bagged a further four. Three weeks later against Melbourne he kicked seven, and the Magpies had found themselves a new goalkicking hero.

Waters had arrived at Victoria Park surrounded by the kind of hype befitting the game’s glamour goalkickers. He had come under notice with Dandenong in the VFA in 1961, where he had followed older brother Bryan after the latter’s brief foray with Hawthorn ended (he won the Liston Trophy in 1959). St Kilda looked to have signed Terry at the end of ‘61, but Terry’s dad thought he was too young and the deal fell through. When Collingwood approached a year later, however, the time was right – but Dandenong then threw a massive spanner in the works when they blocked Terry’s clearance. The Magpies took out a Supreme Court writ against the Redlegs and eventually won the day, but it was messy.

The tug-of-war over Waters became big news leading into the 1963 season, ensuring that there was plenty of media attention on the rookie. But he was unfussed, and had a sensational first season. After those two early bags against North and Melbourne he managed further hauls of eight against South Melbourne and seven against Richmond, ending the year with 50 goals to finish second in the VFL goalkicking behind Hawthorn’s John Peck. He was named Collingwood’s best first year player and polled third in the Copeland Trophy count. It was a dream start to a career.

But Waters took all the adulation with the equanimity one would expect from a kid who’d grown up playing his footy in the back paddocks of Teddywaddy, near Charlton. His father worked with the railways and his mother was a postmistress, which meant the family moved extensively around the Mallee in those early days. Terry was born in Rochester, but received his early education in the school at Teddywaddy which had only about seven students. He had three older brothers, who made one of the back paddocks into a football field. It was that paddock where Terry Waters’ booming punt and drop kicks got their first airing.

The family moved to Dandenong when Terry was still young. There he attended St Mary’s, and won a scholarship to De La Salle College in Malvern. It was here that he played his first seriously competitive football.

The keys to Waters’ game were simple – strong marking and long kicking. He had a wonderful spring, a powerful, sure pair of hands and superb judgement. He was one of the safest and strongest marks in the game. “Terry was a tremendous player,” recalled former teammate Peter McKenna recently. “Certainly one of the best overhead marks I’ve seen. He had great judgement, a great pair of hands and could mark a wet ball like it was dry. And everything was one-grab – no juggling.”

Those qualities meant coaches and selectors almost always liked to play him at centre half-forward or full-forward. Waters himself felt he was better suited to playing as a follower or ruck-rover, where his canny reading of the game often allowed him to settle in a kick behind the play, or to break up opposition attacks with timely intercept marks. He preferred to make the game rather than be opposed to defenders whose sole intent was to spoil and punch.

So it was that Waters didn’t actually last long as Collingwood’s Great White Hope at full-forward. He managed 40 goals in 1964, but by the following year – with Peter McKenna now at the club – he had been reassigned to on-ball duties, resting in either the forward or back pocket. And it was there that he established himself as an outstanding VFL player, his game highlighted by consistency and strong marking around the ground, especially deep in defence. He won the Copeland Trophy in 1966 – so very nearly a Premiership year – and finished third three years later. He won interstate selection for three years out of four, was named the club’s vice-captain in 1967 and was selected in the all-Australian side after the ANFC carnival in 1969.

By this time his beaming face, receding hairline and prominent white ankle bandages had become a familiar part of the Victoria Park scene. When Des Tuddenham was stripped of the captaincy after his preseason “strike” of 1970, it was the loyal deputy who took over.

That meant Waters had the misfortune to be leading the team when it capitulated in the second half of that year’s Grand Final. The next year, coach Bob Rose made it clear he wanted Tuddy to resume the captaincy but the board refused – meaning Waters had to do the job knowing he wasn’t his coach’s first choice. Far from ideal.

To make matters worse, Waters found his form failing him for the first time in 1971. The game was changing, and slower, bigger ruck-rovers were becoming a thing of the past. He was also hit by injuries. Waters lost confidence in his own game, and found it impossible to get it back. Late in the season he was shattered to be taken from the field during a game against St Kilda, describing it as “the greatest insult of my career”. A few days later he resigned the captaincy, and did not play again that year.

When the season ended, Waters let fly in a newspaper interview in which he claimed he had been the victim of a campaign to undermine him. He also slammed the club itself, saying it needed new blood, a new coach, new players and some fresh thinking. Rose resigned soon afterwards.

Perhaps surprisingly, Waters returned to play in 1972 under new coach Neil Mann. But he could recapture neither his enthusiasm nor his form, and retired after the Round 6 game against Hawthorn at Victoria Park. He concentrated mostly on his long career with Carlton and United Breweries after that (firstly as an industrial chemist and later rising to a senior position in the packaging area), before reappearing at Victoria Park in the 1980s as a successful businessman who formed part of the short-lived New Magpies regime.

Even if he wasn’t the full-forward the Magpies were searching for, Terry Waters still ended up carving out an outstanding career. He will be remembered as a wonderfully consistent performer and a great servant who was one of the best high marks of his era. And if fate had been a little kinder, he would also be remembered as a Collingwood Premiership captain.