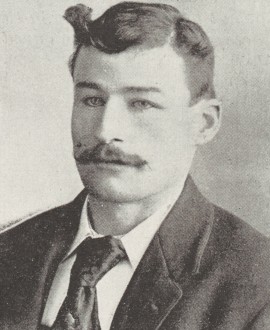 Part of a famous footballing family who produced four high quality senior footballers, Thomas O’Loughlin was one of a trio of ex-Brunswick players who found their way to Collingwood in the club’s first season, 1892.

He was also named captain of a Brunswick 23 that played Carlton in a pre-season match, and was named his team’s best player that day. But it was clear he saw greater opportunities at Victoria Park, and he headed there just two weeks later, being rewarded with a spot in the Magpies’ first ever team (alongside both his former teammates). O’Loughlin was named on a half-forward flank in his early outings, but was later returned to defence, playing mostly on a half-back flank or in the back pocket.

The Leader described his play in that first game as “conspicuously energetic”, and a week later another newspaper said that he “shone’ at different times. But overall his nine games failed to draw him any major headlines, and he returned to Brunswick at the end of the season. He played mostly forward when reunited with the ‘Wicks, and won the club’s goalkicking award that year. He hadn’t been tall enough for a key position with Collingwood, but he was often a marking target with Brunswick, as well as being a splendid kick.

By 1894 he was captaining the club, a post he would hold until the end of the 1890s, and establishing himself as one of the better players in the VFA. In 1895 he was chosen in a combined juniors team to play against Essendon. In 1897 he was chosen by the VFA to play in a representative side against Ballarat. In 1899 The Age was still singing his praises: “Nobody can deny the skill of T. O’Loughlin, Brunswick’s champion.”

He was often accompanied at Brunswick by up to three of his brothers – Jack, Mick and Pat – and they were lynchpins of the sides of the 1890s. Mick and Pat would both end up playing with Essendon, Pat managing 74 games in the VFL era, while Mick managed a handful of games with Essendon and St Kilda before dying from pneumonia and bronchitis at age 29.

There seems little doubt that Thomas O’Loughlin had enough talent, and leadership skills, to have been a handy contributor in Collingwood’s early days. It’s not known whether the club let him go, or whether it was O’Loughlin’s decision to return to Brunswick, but either way it feels like an opportunity missed.