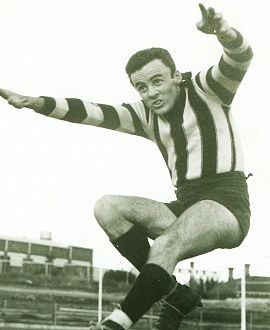 Heading into the 1960 season, Thorold Merrett – the fleet-footed wingman once dubbed a ‘jet-propelled midget’ – could hardly have been in better shape. He had won the two previous Copeland Trophies, had just been named Collingwood’s vice-captain and was playing the best football of what was already a glorious career. All this and he was still only 26 years old.

He started the 1960 season as if he was going to take his game to an even higher level, kicking five goals in a best-on-ground performance against Fitzroy in the season’s opener. He was playing the best football of his life.

Just seven weeks later, Merrett’s career was over. Playing against Carlton in Round 8 he broke his right leg. He’d already come back from a broken left leg in 1954, but this was worse – much worse. He was in plaster until Christmas, and decided early in 1961 that his leg wouldn’t be able to stand up to the rigours of another year of VFL footy.

So once more, as had happened with both Des Healey and Bob Rose, Collingwood had been robbed of the prime years of one of its most brilliant midfielders. And football, more generally, was unquestionably the poorer for the premature retirement of one of the game’s most dazzling players.

There was so much to love about Thorold Merrett’s football that it’s hard to know where to start. His courage was something that had to be seen to be believed. Here was a tiny young man – around 170cm (5ft 7in) tall – thrown into the big time at the age of 16 (he remains Collingwood’s sixth youngest debutant) and never once did he flinch. Former captain Frank Tuck, who arrived at Victoria Park from the country on the same day as Merrett, recalled the first time he laid eyes on his new teammate. “Here was this tiny kid, with a suitcase that looked almost as big as he did,” he said. “He looked just like a skun rabbit, and I thought he would get killed playing League footy.”

But he didn’t. He thrived. Despite his lack of both inches and pounds, he was super aggressive at the ball and never shirked a hard bump, so much so that some critics believed he was a bit too courageous for his own good. But Merrett would have none of that. “You have to face the fact if you are a little chap that you are going to be bowled over now and again,” he once wrote. “But it is a strange fact that the player who doesn’t go in for the ball usually finishes up getting hurt.”

Merrett was a high quality footballer, and everything he did on the field screamed ‘class’; the way he turned opponents inside out, the way he gathered the ball from the ground, the way he would swing on to his left foot and, most of all, the way he delivered the ball to a teammate. Plus he was super-quick, so everything was done at top pace.

“There isn’t a prettier sight in the game than to see this little fellow collect the ball at top speed, swerve past opponents and drive it on to a teammate with a perfect stab pass from his left foot,” wrote the Sunin 1953. “[He is] one of the fastest, neatest, most spectacular and effective little players ever seen in the game. His electric breakaways are double charged with danger to opposing teams because they precede beautifully controlled kicks of impeccable accuracy.”

The club’s 1960 annual report described Merrett as one of the greatest players of his size the game had seen. “He brought delight to football fans with his outstanding performances, when he appeared to do everything right on the football field with purpose and perfection.”

That sense of perfection was never more evident than when it came to his kicking. His short, fast stab passing, in particular, is legendary, and he was regularly held up as the best exponent of the kick in football. When a book called How To Play Aussie Ruleswas published in the early 1960s, the publishers chose Merrett to write a chapter on wing play and the stab kick. Almost all his former teammates would later nominate him as the best stab kick they have seen (though Merrett himself believes that Des Healey was his superior).

The Agepaid a glowing tribute to this part of his game in 1951, while naming him the best wingman in the league in just his second season: “I doubt whether previously we have had such a perfect exponent of the stab kick with either foot. That’s certainly saying something…it’s pinning a rich cockade in the cap of this young man. Certainly there is no player in the game today – no player indeed that I have seen in Australia – that can stab kick with either foot with the arrow-like speed and accuracy of this fellow.”

Merrett credited his skills to his days growing up in Lillimur (near Kaniva) and Cobden, when he would spend hours each day kicking a football at targets or through a tyre hanging from a tree. So good did he become that, by the time he’d made it to Melbourne for his Collingwood debut, it was reputed within country circles that he “could kick a grain of wheat down a chook’s throat at 30 yards”. But it wasn’t only over short distances that Merrett excelled: he scored many goals on the run with raking long drop kicks, too.

Merrett had been a keen Richmond fan as a youngster, and was beside himself with excitement when Jack Dyer and other Tiger types paid a visit to Camperdown in 1949 for a charity day. He made sure he was there, with his father. But when Mr Merrett introduced his boy to the Tiger legend and told him he wanted to play for Richmond, Dyer barely gave him the time of day, not believing that any kid as tiny as Merrett was could seriously be considered for a spot in the VFL. “Come back when you grow up,” he told the deflated youngster.

Merrett, of course, had other ideas – and just six months later he was playing league football. Funnily enough though it was cricket, rather than football, that provided his breakthrough. He came to Melbourne to play Country Week cricket with Corangamite-Cobden in the summer of 1949-50 and turned up at Victoria Park for a meeting with Collingwood cricket legend Jack Ryder. Gordon Carlyon, the football club’s astute secretary, was also there, and he asked whether Merrett played footy, too. A quick call to former Magpie Jack Murphy, who had coached Merrett at Cobden that year, confirmed his potential, and next thing he knew he was back at Victoria Park for the football practice matches.

Merrett continued to play cricket and was actually a fine opening batsman who made it to the Collingwood District first XI. He was also a junior champion table tennis player and more-than-handy at tennis. But once he trialled for the Magpies, football became his number one priority. Initially named on the team’s supplementary list for 1950, Merrett found himself in the senior side by the seventh round, making an instant splash with everyone talking about – of course – his exquisite pinpoint passing to Bill Twomey, who kicked 11 goals that day.

From that moment on, Merrett became an integral part of the Collingwood set-up. He is best remembered as a wingman, but he also played a lot of footy as a rover/half-forward: in fact he filled that role in both of his Copeland-winning years. Like the very best players he was able to produce his best when it most counted, starring in both the 1953 and 1958 Premierships and numerous other big games. In 1958 alone he somehow managed to be named best on ground by some media outlets in the second semi-final – which the Magpies lost by seven goals – then followed up with similarly outstanding displays in the preliminary final and Grand Final.

He retained a high profile even after his forced retirement, spending 15 years on ABC TV’s football panel, running a highly successful chain of sports stores and returning to Victoria Park as a committeeman in the late 1970s.

But the most powerful memory of Thorold Merrett will always be of the ‘jet-propelled midget’ and his bullet-like stab kicks. And the lingering frustration at the extra years of breathtaking football that his broken leg denied us.