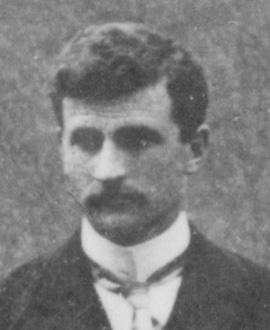 These days, pretty much every footy club has its own doctor. But for a while back in the early 1900s, Geelong’s club doctor was also its full-back – a former Collingwood player by the name of Dr Tom McLean.

Such high-level multi-tasking might have been beyond your average footballer, but Tom McLean was anything but average. Indeed, there was something of the prodigy about him at a young age.

He was born and spent his early years in Bright, but moved to Melbourne and was educated at Wesley College. By the age of 18 he was already a promising fast bowler playing pennant cricket with St Kilda, and soon after turning 19 he made his senior footballing debut with Essendon in the VFA.

By this time he’d started his medical degree at Melbourne University, and he switched his cricket from the Saints to the University team. He played five games of football with Essendon late in 1895 and kicked two goals, underlining his early promise.

But he seems to have concentrated on his studies after that, and it wasn’t until his graduation year of 1900 (by which stage he was captaining Queens College at cricket, opening both the batting and bowling) that he was seen again at the highest level – this time in a Collingwood jumper.

It’s not known how the Magpies found him (though he played cricket at Uni with fellow Magpie Doug Watsford, who played in the same period), but there was an unexpected hurdle just before his debut, with a special League hearing being called to determine if he needed a clearance in order to play with Collingwood. The Magpie believed that, because his appearances with Essendon had taken place in the VFA, no clearance would be needed for him to play in the VFL. But many other club officials – including the League’s umpire and permit committee – thought differently. In the end the League ruled in Collingwood’s favour after a marathon hearing, but it was a decision that caused some controversy, as it differed from what had become accepted practice. There was even talk that there might be protests if Collingwood played McLean and won, though a journalist with The Ballarat Star wrote: “McLean, I may say, is just the sort of young man one likes to see in the football field, and I should be sorry to see anything done which might have the effect of preventing him from playing.”

The Magpies were not deterred by the threats or the controversy, and rushed Tom straight into the senior team the day after the hearing, named at full-forward for the Round 8 game against Fitzroy. He was dropped the next week, came back the week after and ended up playing five games that year. Most of his games passed largely without notice, but he raised eyebrows – and expectations – when he kicked three fine goals against Carlton in Round 13.

Any hopes of a promising Collingwood career were thwarted, however, when Tom – by now officially Dr McLean – accepted a position after his graduation as a junior resident surgeon at Geelong Hospital. He was elevated to the senior resident surgeon role there in October of 1901, and resumed his VFL career with Geelong between 1902 and 1904, where he played a further 12 games, mostly at full-back. It was during these years that he also acted as Geelong’s club doctor from time to time.

Early in 1904 he left Geelong to take up private practice in Traralgon, and he remained there until his death in 1948. He became a major public figure in that town, continuing to star locally at both cricket and football and becoming involved in all kinds of local activities. He was president of the football club, secretary of the racing club, secretary of the bowling club, president of the Traralgon Band Committee, deputy local coroner and was prominent in Masonic circles. For part of the First World War, he was the only doctor in the town.

Dr Tom McLean’s contribution to Traralgon is still remembered today. The local history website says of him: “The old white-haired doctor could look back on forty years of service to the town, much of it without any reward other than the thanks of the people he was serving, both as a doctor and also as a townsman.” That’s a fine epitaph to a life that ended up being about much more than football.