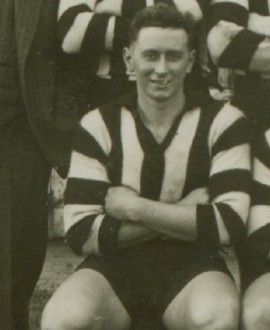 In 1946 there were few bigger names in football than Essendon’s triple Brownlow Medallist Dick Reynolds.

So when Collingwood finished second on the ladder that year, and faced up to the Bombers in the second semi-final, the Magpies knew that if they were to have any chance, they’d need to find a way to keep Reynolds quiet.

And that’s where Tom Wallis stepped up and enjoyed arguably the finest moment of his six-year VFL career. “No player In the League second semi-final did more for his team than Tom Wallis,” wrote The Sporting Globe. “The Magpie half-back flanker blanketed Dick Reynolds so well that for the first time this season Reynolds did not score a goal.”

Unfortunately for Tom, his teammates’ wayward kicking (they could manage only 13.22) allowed the Bombers to escape with a draw (they would go on to win the replay, and subsequently the Premiership). If the fortunes had been reversed then Tom’s role on Reynolds would still be recalled as one of the great finals games by any Magpie.

As it is, it just goes into the record books as yet another example of a game where Tom Wallis did whatever job was required of him by his coaches and teammates. And that was very much his trademark.

Wallis was a low-key but valuable member of the Magpie teams of the mid-1940s. He had started with Northcote Stars the the Melbourne Boys’ League, played for a while with Alphington and got his first taste of Collingwood life with the seconds in 1940. He joined Northcote in 1941, then returned to Collingwood in 1942 after the VFA went into abeyance due to the Second World War. But this time he went straight into the seniors, making his debut in the opening round of the year against South Melbourne.

Tom spent most of his time at Collingwood on a half-back flank but he was also tried on a wing and in the centre. As a defender he was the dashing type who loved to run out of the back half. But, as his work on Reynolds showed, he was also more than capable of playing a shut-down role when required. He was a wonderful athlete who competed at Stawell, and at Victoria Park was bracketed alongside renowned speedster Bill Twomey Jnr as the ‘athlete’ within the team.

After 37 games in his first three seasons he returned to Northcote as playing coach in 1945. But after just six games there he returned to Victoria Park – setting himself up for two more years of consistent football that would culminate in the September clash with Reynolds that would help define his career. “The return of Tommy Wallis from his coaching position at Northcote has added pace and strength to the Collingwood defence,” noted The Sporting Globe at the time.

Strangely, Tom’s game against Reynolds was just about his last hurrah at Victoria Park. He managed only seven more games in 1947 before returning again to Northcote, where he was welcomed back with open arms. After three more years there he served as playing coach at Wonthaggi, then finished his career with Epping in the Diamond Valley League. He then became involved with the newly formed Lalor Junior Football Club, going on to be President, and also served as coach of the Collingwood under-19s from 1961-63. In that role he introduced his son Gary to the club, who would go on to play more than 30 senior games as well as nearly 80 in the lower grades. His second son, Glen, played with the under-19s in 1969-70.

Tom Wallis was an unheralded but consistent performer during a turbulent period where the club went from struggling for numbers and competitiveness, to returning to a preliminary final. And he continued to give to the club long after his retirement from the playing fields.