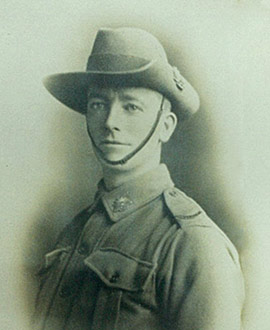 December 1916 must rank as one of the most tragic months in the history of the Collingwood Football Club.

As the First World War raged on in a bloody stalemate during one of the worst winters France had experienced, the lives of three one-time Collingwood footballers were altered forever. Two of them died that week; another suffered wounds that would ultimately cost him his life.

Percy Rowe was better known to Magpie fans as ‘Paddy Rowan’, the non-de-plume that he carried in his sporting life. On December 4 1916 he was critically wounded and died. Three days later, Peter Martin, a former Magpie who hadn’t played for more than a decade, and who was already beyond his 40th birthday, suffered horrific gun-shot wounds to his skull. He would lose his right eye, which brought about a permanent discharge and a return home to Australia. He would be dead 15 months later.

And if the week could hardly have been any worse for a club so far removed from the western front, on December 12, 1916, a popular former player in Tom Wright was killed by a German shell.

Wright had played 12 games across the 1906-07 seasons, kicking seven goals, but his impact on the game was felt far beyond the confines of Victoria Park.

He had been born and bred in Collingwood. His employment was as an apprentice tiler and slater, while his sporting passion was as a footballer, and he showed great early promise.

Wright was almost 24 when he played his maiden game with the Magpies, against Essendon in Round 13, 1906. The Age recorded: “Wright, a district junior, gave satisfactory promise of future usefulness forward.” He managed four games for the season, playing in the semi-final loss to Carlton.

More games would come in 1907, as Wright played eight matches, including yet another semi-final loss, this time to South Melbourne. Sport revealed in May 1908 that Wright “had been called away on business. This promising follower has gone to Christchurch and will doubtless assist the Australian game in the Dominion.”

As Fallen, Footballers Who Never Returned From War detailed, Wright had decided to “emigrate to New Zealand, where he became intensely involved in the development of the Australian code. It says much for Wright’s determination that he was able to convince so many Kiwis to play Australian football as rugby already had won the hearts of Kiwis.”

When the 1908 Australasian Football Carnival took place in Melbourne, Wright was back as captain of the New Zealand team, a rare distinction and honour for a boy from inner-suburban Collingwood.

Part of the theatrics of having the New Zealand team compete was the fact they performed a “haka”, and incredibly they won a couple of their early games in the carnival to be quite competitive. The Mercury said after the Victorian side had comfortably won their contest: “New Zealand showed up often as willing learner and triers.”

Gerald Brosnan wrote in The Winner: Wright “entered heart and soul into the advancement of the Australian game. Despite the fact that rugby has always had a particularly strong following in New Zealand, he with a few other ardent Victorians succeeded in infusing much life into the Australian game.”

His time across the Tasman Sea was limited. By 1909 Wright was back in Melbourne and had won a clearance to Prahran in the VFA, and would later take up a position on the Collingwood committee – a post he had to relinquish once he enlisted to fight in World War One.

Wright enlisted on February 3 1915, two and a half months before the Gallipoli landings. He was originally with the seventh reinforcements of the 7th Battalion, leaving Australia on July 15. He served in Egypt and Gallipoli before moving to the 59th Battalion ahead of a move to the western front. He served well and reached the rank of Corporal.

In early December 1916, he had something to look forward to. Wright had four more days to serve in the frontline before being allowed Blighty leave. He was meant to spend Christmas 1916 in England, away from the guns.

Sadly, he would never make it.

A letter published in The Winner on December 6, 1916 explained his passion for the game he excelled at, and the club he always loved: “I see by the papers that football falls in for a lot of argument. Well, as for myself, I think it would do a lot more good than harm if they carried on as they always have. Think of the old saying ‘all work and no play makes Jack a dull boy’. Anyhow, I am very pleased that some of the teams took it in the same light as I, including the good old Magpies, and I am quite sure that this is the opinion of five out of every six of the boys at the front.”

Six days after the letter brought a smile to those in Melbourne who knew him, and watched him, Wright was gone.

A letter written to the club’s secretary E.W. ‘Bud’ Copeland from a former captain of the local cricket club detailed the loss of Wright.

E.R. Errington wrote: “Long before this reaches you, you will have heard the sad news about poor old Tom.”

“He and I, since the early days in Broadmeadows were inseparable. In Melbourne, Egypt and Gallipoli, we shared the same tent and dug-out. I never had a better mate. When he met his death, he was either going for a stretcher or to dig out a buried comrade. I am glad the old chap didn’t suffer any pain.

“Poor old Tom! There are many of us here who will miss a true and brave mate. His mother will be heart-broken. I do feel for her and her other sons.

“He lies with many others on a little ridge by the Somme. The Padre of the 59th has his papers and will send them home. Your club has lost some fine footballers and the army some fine men – men like them can never be replaced. I can’t tell you how much I miss my old mate.”

A year to the date of his death, Wright’s mother penned a poem for the Argus:

“I often think of days gone by
When we were home together
A shadow on my life is cast
My son has gone forever.”

‘Old’ Tom Wright was 34 when he breathed his last.